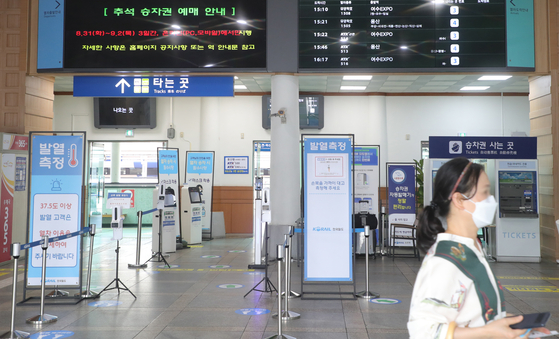 Information for train ticket reservations over the Chuseok holidays is being displayed at Jeonju Station in North Jeolla on Tuesday. Train tickets will only be sold online or over the phone to prevent people from crowding to buy them at the train stations. At first, only window seats will be available. The government will decide whether or not to sell the remaining aisle seats in its announcement for special new anti-virus measures for the upcoming Chuseok holidays this Friday.


Fifty-three people in the U.S. Forces Korea (USFK) recently tested positive for Covid-19, the highest recorded figure of new infections for the group so far.

The USFK said 18 service members and one family member stationed at Osan Air Base, located in Pyeongtaek, Gyeonggi, tested positive.

Eighteen other service members and one contractor on temporary duty, who have reportedly visited Korea to participate in the joint South Korea-U.S. military exercise, tested positive in a diagnostic Covid-19 test prior to their departure.

Including these infections, more than 80 coronavirus cases have been reported from Osan Air Base in July.

The remaining two Covid-19 cases, a family member and a Korean contractor, were reported at Camp Humphreys, the largest U.S. military base overseas, in Pyeongtaek, Gyeonggi.

All infected people were moved to isolated Covid-19 buildings in Osan, Humphreys or a Korean medical facility.

The USFK said an additional 13 service members tested positive upon their arrival and are also being treated at a quarantine facility.

The U.S. military has drawn criticism after holding a no-mask dance party at a club inside the Osan Air Base on Aug. 21 in violation of social distancing rules.

The latest cases brought the total Covid-19 caseload in the USFK to 1,350.

Korea’s coronavirus daily cases continued to stay above over 1,000 for 56 days in a row.

By region, cases reported from the greater Seoul area again jumped to over 70 percent of domestic transmissions, at 70.8 percent.

Infections outside the capital region fell down to 29.2 percent, with 56 cases in South Gyeongsang, 50 in Daegu, 44 in Busan, 38 in South Chungcheong and 34 in Daejeon.

The number of critically ill patients rose by 13 from the previous day to 409, while one more death was reported, raising the death toll to 2,285.

A mutation of the Delta variant — the Delta Plus variant — has also been found in the new cases.

Some scientists warned the Delta Plus variant may be even more transmissible than the Delta variant, and the World Health Organization (WHO) recently labeled it a "variant of concern," medical terminology for a more dangerous strain. 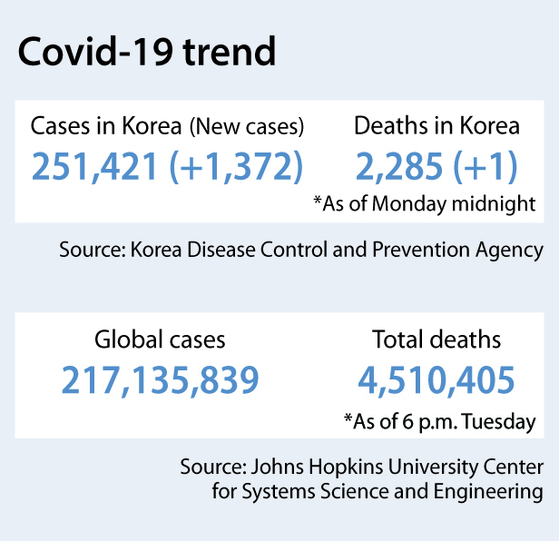 Korea also confirmed its first case of another mutation of the Delta variant, called the N501S mutation, which was first detected in Tokyo.

To prevent the inflow of the Lambda variant, the new Covid-19 variant that is spreading rapidly in Peru, health authorities said Tuesday that all arrivals from Peru and Chile must quarantine for seven days starting Sept. 10.

First Koreans to be vaccinated may be those stationed with USFK