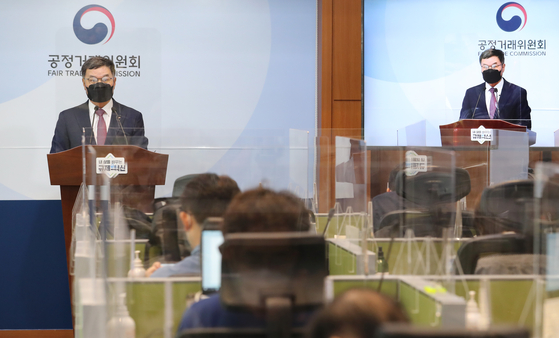 Sung Kyung-je, an FTC official, announces its conclusions on big business group shareholdings at the agency's headquarter in Sejong on Wedesday. [YONHAP]

The Fair Trade Commission (FTC) said while shareholdings controlled by heads of conglomerates and their relatives seemed to shrink in some of the companies they control, their real power has not weakened.

Instead, their control of business groups actually increased through shareholdings of affiliates of the same group.

According to the FTC on Wednesday, shares owned by the head of conglomerates and relatives in companies they control averaged 8.4 percent this year, a 0.3 percentage point drop from last year’s 8.7 percent.

For the top 10 business groups, the FTC said the average stake in companies within the conglomerate owned by the head of the group has averaged below 1 percent since 2014, except for 2020.

For this year, it averaged 0.8 percent.

Shares owned by members of business groups' founding families have been declining since 2006. For this year it was 2.4 percent, a fall from 2.5 percent in 2020.

However, shares owned by other affiliates in the group have been increasing, from 54.2 percent in 2020 to 55.2 percent last year.

Among the 60 conglomerates owned by either a founder or members of his family, Hyosung Group was top at the list for the number of affiliates in which founding family members have stakes. The family owned stakes in 23.


One of the biggest changes this year is how stakes owned by IT conglomerates family members have increased.

“Considering the possibility of the heads of conglomerates expanding their control [over business groups] through deceptive means, there is a need to heighten monitoring of newly emerging groups and IT conglomerates,” said Sung Kyung-je, head of the FTC's business policy bureau.

“There has been an increase in cases of IT companies in which the children of the head of the business group owns shares within the group, and of overseas affiliates [some completely owned by the head of the conglomerate] investing in local affiliates.”

Sung said this kind of manipulation by families controlling groups violates the principle of fair competition.

Kakao was a new addition this year to Korean IT conglomerates in which children of the head of the business group now own stakes in companies in the group.

The two children of Kim Beom-su, Kakao's founder, own a combined 0.002 percent stake in Kakao.

In January, Kim Beom-su gave Kakao shares to relatives including his two children, who are in their 20s. Each received 60,000 shares.

Until last year, Nexon was the only IT company to be on the FTC list. The two daughters of Kim Jung-ju own stakes in two companies within the game developer's group, one of which they fully own.

The FTC said this year 709 companies will be regulated under the Fair Trade Act, which bans affiliates in groups from doing too much business with other affiliates.

The government closely monitors companies in which founding family members own substantial stakes. This is to prevent those families from abusing their position within the group to funnel business to affiliates in which they have a controlling stake.