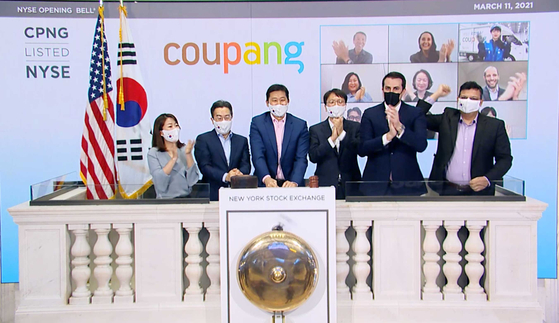 Coupang founder and CEO Kim Bom-suk, third from left, upon the e-commerce company’s listing on the New York Stock Exchange in March. Coupang was designated a large business group by the Fair Trade Commission on Thursday. [YONHAP]


Coupang was designated as a “large business group” by the Fair Trade Commission (FTC) on Thursday, subjecting the U.S. company to a wide range of additional regulations.

In a twist, no leader was designated, Korea’s anti-trust regulator saying that the company would be its own head.

The list of business groups with more than 5 trillion won ($4.5 billion) of assets is drawn up annually. Activities of the designated groups are subject to extra scrutiny in an effort to prevent abusive related-party transactions.

This year’s list has 71 groups, up from 64 last year. It is effective Saturday.

Normally, the individual that most influences the group is chosen as the leader, and that person takes responsibility for transactions between companies within the group and between these companies and shareholders.

Kim Bom-suk, company founder and CEO of Coupang Inc., was not named group leader by the FTC.

According to the regulator, he could not be designated as the head because he is a U.S. citizen.

“It is evident Kim Bom-suk controls Coupang Corp. through the U.S. company Coupang Inc.,” said Kim Jae-shin, a spokesperson for the FTC, during a briefing Thursday. But Kim Jae-shin added that the FTC has consistently named a company as the head of itself when it is run by a foreigner.

By all other measures, Coupang qualifies as a large business group and Kim Bom-suk as the leader, with special shares that give him 76 percent of the votes as shareholder.

S-Oil and GM Korea are examples of companies without a person as the FTC-designated head because their largest shareholder is a foreign-based firm.

The FTC requires a business group chief to report transactions made by their direct family and cousins if they own 3 percent or more of a company.

The FTC decision on Coupang has been met with a range of reactions.

“Excessive regulations are interfering with the merger and acquisitions of promising small and mid-sized companies and the discovery of new businesses for venture companies,” said Federation of Korean Industries in a statement on Tuesday, calling for an end to the large business group system.

The Citizens’ Coalition for Economic Justice, a civic group, argued that “there is no legal basis that a foreigner can’t be named a chief” and that not appointing the Coupang founder as the company’s head is “adverse discrimination.”