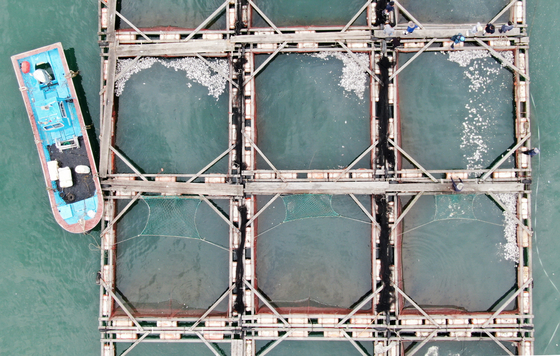 Korea's fishing industry is severely shorthanded due to restrictions on foreign workers forced by the pandemic.

According to the National Federation of Fisheries Cooperatives (Suhyup) on Thursday, only 69 foreign workers acquired E-9 non-professional employment visas in the first half of this year compared to the 3,000 that were expected by the industry.

Suhyup said this was largely because of Covid-19 quarantine restrictions against countries where the workers come from, particularly Indonesia and Vietnam.

E-10 visas have been stopped for the second half due to quarantine concerns.

There are around 23,000 fishermen working on vessels 20 tons or larger, with foreigners accounting for roughly 40 percent.

Foreigners on E-9 visa number around 15,000, less than half working on fish farms.

“Among foreign workers, 69 were able to arrive this year, which is less than 3 percent of the workforce needed [on local fish farms],” Suhyup said in a statement. “We plan to actively request the government to take necessary steps such as extending visas of foreign workers already in Korea.”

Suhyup also said it is aking the government to allow the entry of foreigners regardless of the quarantine situations of the countries  they come from as long as they meet Korea's requirements, including vaccinations, PCR testing and self quarantine.