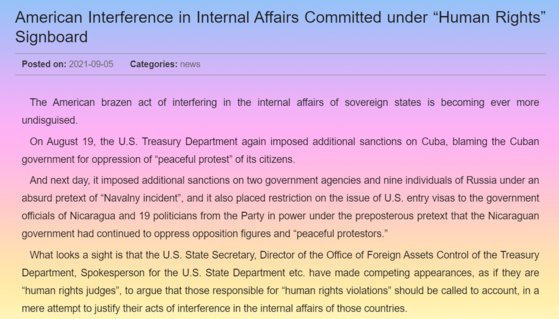 Screen capture of the statement from the North Korean Foreign Ministry on the U.S. withdrawal from Afghanistan, released on its website on Sunday. [SCREEN CAPTURE]


The North Korean Foreign Ministry in a recent statement criticized the U.S. pullout from Afghanistan, calling the American government a “destroyer of human rights and democracy.”

“The international society has already come to know better through the crisis in Afghanistan that the U.S. is the destroyer of ‘human rights’ and ‘democracy,’” reads part of the statement released by the ministry on Sunday. “The U.S. should wake up to the reality that there is no more country which would lend an ear to its hypocritical chanting of ‘human rights,’ and put an immediate end to its act of interfering in others’ internal affairs.”

The anti-U.S. rhetoric from the North follows several United Nations Security Council meetings on the situation in Afghanistan, with the last dated Aug. 30.

The United States pulled out of the country on Aug. 31, ending its 20-year war with the Taliban, who took control of Kabul and the Afghanistan government earlier last month.

The security council has also adopted major sanctions on North Korea in response to its nuclear weapons development. The sanctions have been supported by the United States, a permanent member of the council, which also levied its own sanctions on the North in 2008, which have been extended annually.

Although the Joe Biden administration has constantly signaled that Washington is open to dialogues and diplomacy with Pyongyang, it has maintained the official position that sanctions must be kept in place if there is no substantial change in the North Korean nuclear issue.

“What looks a sight is that the U.S. […] have made competing appearances, as if they are ‘human rights judges,’ to argue that those responsible for ‘human rights violations’ should be called to account, in a mere attempt to justify their acts of interference in the internal affairs of those countries,” the statement says.

The statement was released two days after some media outlets in Russia ran stories on recent discussions at the UN Security Council meetings that allegedly called for sanctions relief on North Korea.

“The proposal to ease sanctions on North Korea is still on the negotiating table of the Security Council, but the United States put the brakes on immediately,” Interfax, a Russian media outlet, reported on Saturday, quoting sources.