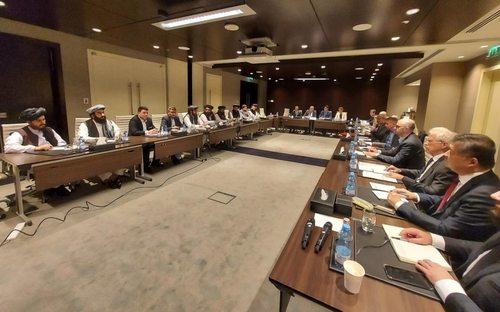 
Korea joined a group of diplomats from over a dozen countries for another round of high-level talks with Afghanistan's new Taliban government in the Qatari capital of Doha Wednesday.

Korean Ambassador to Afghanistan Choi Tae-ho attended the meeting between acting Afghan Foreign Minister Amir Khan Muttaqi and a group of 16 ambassadors and representatives from countries including the United States, Britain, Japan, Australia, Germany and Canada, along with a European Union official, said a diplomatic source Thursday.

The foreign envoys discussed human rights, humanitarian assistance and other issues in talks that lasted around three hours.

This marks the second such meeting by a senior Korean diplomat with the interim Afghan government since the Taliban's takeover of the Western-backed Afghanistan in early August.

Officials from the South Korean embassy in Afghanistan evacuated from the country after the Taliban’s takeover and have moved to a temporary office in Doha.

Choi previously took part in a similar meeting between a group of diplomats from 14 countries and the Taliban on Oct. 27.

Diplomatic sources said the latest talks were a bit more concrete than the previous one.

Korea and the other countries focused on issues such as countering terrorism, providing humanitarian aid, and guaranteeing the rights and education for women in Afghanistan.

Muttaqi was said to have stressed that corruption has decreased and public security has stabilized after his government gained power. However, he emphasized that frozen assets must be released for the country’s economy to run smoothly.

The Taliban has pushed for the release of more than $9 billion in Afghan central bank assets frozen by the U.S government after its takeover of Afghanistan.

The U.S. State Department after two-day talks with Taliban representatives said last Thursday that Washington “remains committed to ensuring that U.S. sanctions do not limit the ability of Afghan civilians to receive humanitarian support from the U.S. government and international community while denying assets to sanctioned entities and individuals.”

The Taliban’s Foreign Ministry spokesman Abdul Qahar Balkhi tweeted after the meeting Wednesday, “The delegates reiterated that humanitarian and health support should be provided to Afghanistan and that problems should be resolved through dialogue.”

The Korean government announced Monday it will provide Afghanistan humanitarian aid worth $32 million through international organizations to help people in urgent need of food and health care services.

The fund will be delivered through United Nations agencies to provide food, shelter and health care services for Afghans, prioritizing children and women in a more vulnerable situation, according to Seoul’s Ministry of Foreign Affairs.

Korea also pledged to direct some funds to emergency assistance for Afghan refugees in neighboring countries including Iran and Pakistan, and vowed to continue contributions to help resolve the humanitarian crisis in Afghanistan.

In late August, Korea airlifted a group of 390 Afghans who have either made special contributions to Korean government humanitarian aid projects or were embassy staff, and their family members, out of the war-torn country in an evacuation plan codenamed “Operation Miracle.”