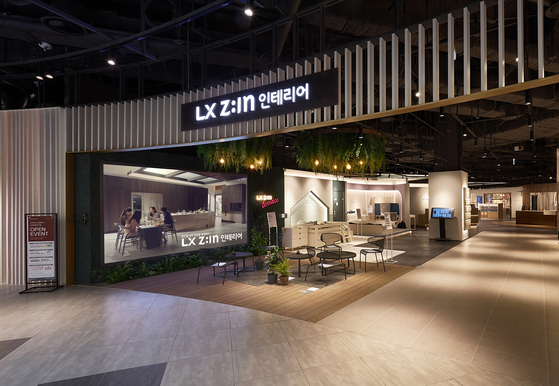 LX Hausys reported Monday in a regulatory filing that it plans to invest 300 billion won ($259 million) in a special purpose company formed by IMM Private Equity (PE). The investment will be made via private equity fund (PEF), helping IMM PE to finance its acquisition of Hanssem.

IMM PE signed an agreement with Hanssem in July to buy nearly a third of the company. A 15.45 percent stake owned by Hanssem's CEO Cho Chang-geol, the largest shareholder, will be up for acquisition along with shares of seven other affiliated parties.

The exact percentage of the purchase has not been disclosed, but local media reports put the total amount being offered at 30.21 percent for some 1.5 trillion won.

IMM is currently conducting due diligence on Hanssem.

“[The decision] was based on the company’s mid- and long-term strategic plans to enhance its market share in the construction material business, with aims to develop into a home interior service company.” said an official for LX Hausys.

LX Hausys announced that the final investment decision hasn't been made since IMM PE is currently deciding on a strategic investor and that the investment may not be made if LX Hausys is not selected.

“If LX Hausys is finalized as the strategic investor, we expect to strengthen our presence in the local interior design market using the synergy between two companies,” said the LX Hausys official.

Following the announcement, shares of LX Hausys rose 7.62 percent to 96,000 won on Tuesday.

Lotte Shopping is another company that is considering bidding for a stake in Hanssem.

The company announced via regulatory filing on Sept. 1 that it's reviewing to invest in the IMM-led PEF for the acquisition of Hanssem, but "nothing specific has been decided."

It said another filing will be published either when specific matters are decided or within the next month.

The home décor market has been rapidly growing as many spend more time at home due to the pandemic. According to the Construction & Economy Research Institute of Korea, the local home interior design market was 41 trillion won last year and is expected to grow to over 60 trillion won this year. Businesses related to furniture, construction material and home décor is expected to flourish.

"If LX Hausys acquires Hanssem, it will gain access to Hanssem's business-to-consumer retail channels and home interior installment capabilities," said Kim Mi-song, a Cape Investment & Securities analyst. "LX Hausys just tapped into the total home decor market, and this will serve as a chance [for the company] to gain a foothold in the home interior market that Hanssem took over three years to enhance presence."