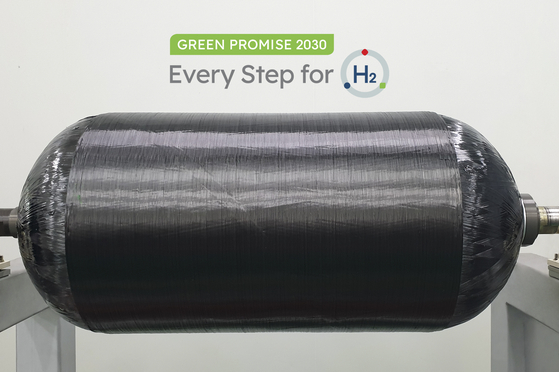 
Lotte Chemical said Tuesday it will build a pilot plant to mass produce hydrogen storage tanks, a key part of fuel-cell electric vehicles (EVs), in a move to ramp up efforts to boost its hydrogen business.

The 1,488-square-meter (16,020-square-foot) plant will be built in Incheon where Lotte Aluminum’s factory is already located. The chemical company aims to complete the construction by the first half of 2022.

The pilot plant will help the company "gain foothold in the growing fuel-cell EV market."

The factory is part of the company’s 10-year hydrogen business roadmap plan dubbed “Every Step for H2” revealed earlier in July in order to realize carbon neutrality by 2040.

The chemical arm of Lotte Group said it aims to supply 30 percent of Korea's hydrogen by the end of the 10-year investment, generating 3 trillion won ($2.6 billion) in annual revenue and achieve 10 percent of its operating profit from the hydrogen business.

The company also vowed to develop technology to mass produce hydrogen storage tanks. The goal aims to have 100,000 hydrogen tanks by 2025 and 500,000 by 2030 that could be used to supply hydrogen to vehicles.

Lotte Chemical has currently been working to acquire certifications from overseas countries including those in Europe to commercialize its hydrogen tanks. The company said it aims to use the tanks in not only vehicles, but also for other transportation means like drones.