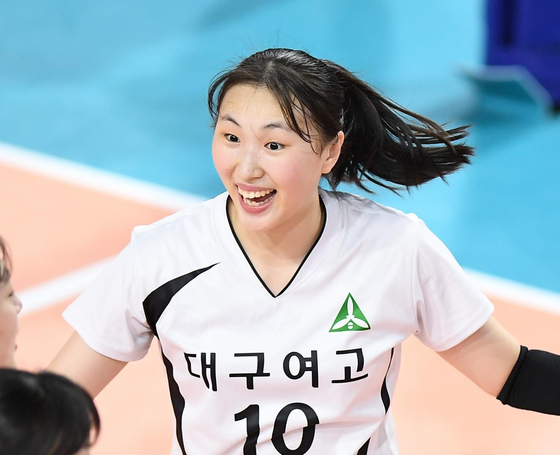 
The V League rookie draft was held on Tuesday in Cheongdam, southern Seoul, one month ahead of schedule to allow new team Pepper Savings Bank time to prepare an entirely new squad for the 2021-22 season.

Park Sa-rang and Park Eun-seo were expected to be the top picks as they are experienced rookies, both having represented Korea at the 2019 FIVB Volleyball Girl's U-18 World Championship, when Korea finished 13th out of 20 countries.

"Thank you for having faith in me," Park Sa-rang said after she was drafted as the first player of the new club. "I am grateful to the Pepper Savings Bank head coach and other staff members. I also want to thank my parents for raising me all these years."

Libero Moon Seul-ki, who has spent the last 10 years playing for corporate team Suwon City in the Korea Corporates Volleyball Federation, also entered the draft and was picked by Pepper Savings bank.

"Even though I am joining a professional team late in my career, I intend to work extra hard" said Moon.

"I kept playing in the corporate team because I have a passion for volleyball," Lee said. "Because I am older than most players, I want to do my job right and be of help to the team."