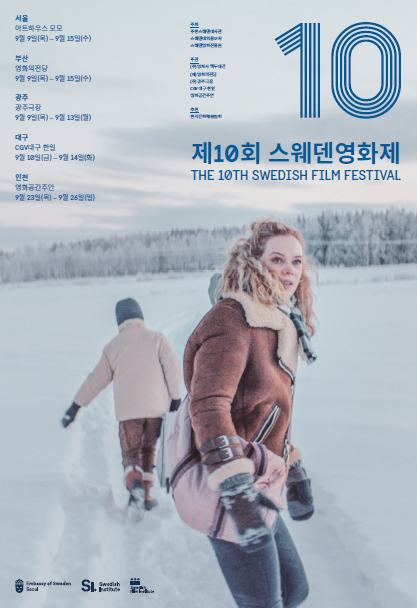 The 10th Swedish Film Festival launched in Seoul, Busan and Gwangju on Thursday, bringing 10 films under the theme of “The Sustainable Value of Life.”

The annual festival, organized by the Embassy of Sweden in Seoul in collaboration with the Swedish Institute, the Swedish Film Institute and Korea Sweden Arts and Culture Society, has brought to Korea this year five films that have never been screened in Korea, including “Charter” (2020) by Amanda Kernell and “My Father Marianne” (2020) by Marten Klingberg.

“The festival will show the stories of a mother trying to mend a broken family relationship, a father who realizes his gender identity at a late age, a Swedish young man feeling lost between work and love, a Scottish single mother who builds up hope in the slums, a disabled man who overcomes the impossible and achieves his dream, and a family that gives strength to the father who fights an illness,” reads a statement released by the Swedish Embassy in Seoul.

“The films we are presenting this year tell the stories of people facing challenges, sorrows and conflicts without losing hope,” it said. “On the surface they feature very Swedish characters and details, but touch on very universal issues."

The screenings will take place from Thursday to Sept. 15 at Arthouse Momo in Seoul and Busan Cinema Theater, and through Sept. 13 in Cinema Gwangju.

Additional screenings will take place at the CGV Daegu Hanil theater from Friday to Sept. 14, and at the Cinespace Juan in Incheon from Sept. 23 to 26.

Tickets are 1,000 won ($0.85) in Seoul, Busan and Daegu, and admissions are free in Gwangju and Incheon. Visit swedishfilmfestival.com for further information about the films available.

The film festival launched in Korea in 2012 when Queen Silvia visited Seoul.

“I firmly believe in the power of art and culture to connect people and to broaden our perspectives,” said Daniel Wolven, Sweden’s ambassador-designate to Korea. “I am grateful that the annual Swedish film festival could meet the audience even during the pandemic. I hope you have the opportunity to visit the cinemas to watch the Swedish films.”