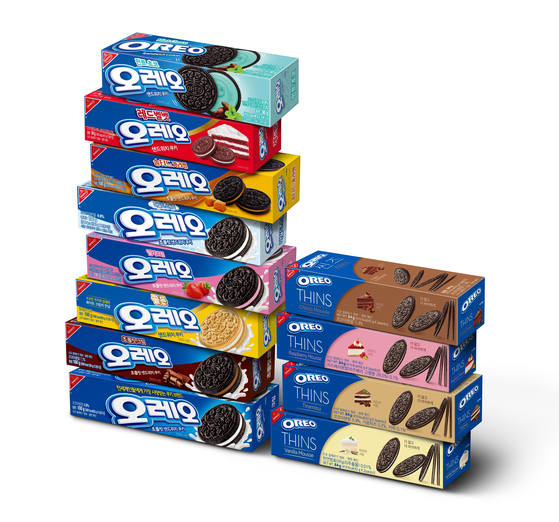 Well-loved for over a hundred years, Oreo cookies come in a wide range of flavors including mint chocolate. [DONGSUH FOODS]

A craze for mint chocolate flavored items is sweeping Korea. Backed by strong support from the younger generation, the dessert industry is rolling out all sorts of products in mint chocolate versions, varying from ice cream to beverages.

Oreo, the well-loved sandwich cookie, is also jumping on the trend.

Dongsuh Foods, the Korean food manufacturer, introduced the new Oreo mint chocolate cookie with mint-flavored cream sandwiched between chocolate biscuits. Even those who are not familiar with the mint chocolate flavor will find the sweet cream enjoyable, Dongsuh Foods explained.

The company also added that it plans to hold various events through its social media channels.

First launched back in 1912 in the United States, Oreo has become the world’s bestselling sandwich cookie. Dongsuh Foods sells both classic Oreo cookies and Oreo Thins, a version of the cookie that is 43 percent thinner than the original.

Oreo Thins Chocolate Mousse, one of the flagships of Oreo, is known for its crunchy cookie and the rich flavor of chocolate mousse cream sandwiched between, which goes well with a cup of coffee.

Oreo Red Velvet is another sought-after product. In 2017, Dongsuh Foods launched Oreo Red Velvet as a limited edition flavor selling over a million boxes. The product were officially relaunched in November 2019.

Moreover, consumers are coming up with creative recipes to enjoy Oreo cookies. A recipe for Oreo Swiss Roll, for example, caught the eye of many Oreo fans online.

“Oreo cookies have been well loved for more than a hundred years across the globe,” an official from Dongsuh Foods said. “We hope the variety of flavors offered by Oreo makes your snack time more enjoyable.”