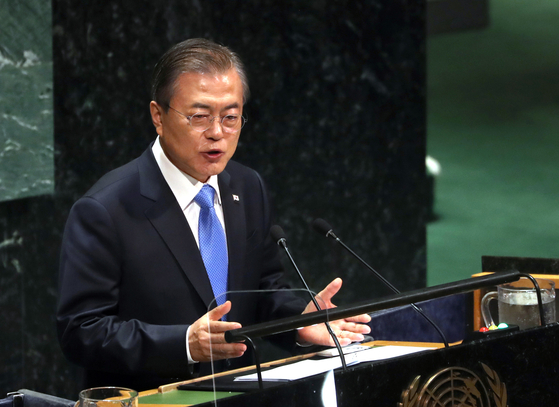 President Moon Jae-in speaks at the United Nations General Assembly in New York on Sept. 25, 2019. He will depart on a five-day trip to the United States Sunday and deliver a keynote address to the UN General Assembly next week for the fifth consecutive year. [YONHAP]

Moon is set to depart on a five-day trip for the United States on Sunday, which also includes a layover in Honolulu, Hawaii, Blue House spokesperson Park Kyung-mee said in a press briefing.

He will deliver a keynote speech at the 76th session of the UN General Assembly, which opens this Tuesday, and also address the opening session of the second Sustainable Development Goals (SDGs) Moment event convened by UN Secretary-General Antonio Guterres next Monday. The SDGs are a blueprint for fighting poverty and hunger, achieving gender equality, confronting the climate crisis and building a more sustainable future.

The president plans to hold bilateral summits with foreign leaders on the sidelines of the General Assembly, added Park, without specifying the countries.

Last year, Moon addressed the General Assembly through a video conference due to the Covid-19 pandemic.

Both South and North Korea commemorate their 30th anniversary of becoming UN member states in September 1991.

Moon partaking in the UN General Assembly is an opportunity to “reaffirm the international community's support for the efforts to advance peace on the Korean Peninsula,” said Park.

She said Moon is expected to convey South Korea’s intention to expand its role to “respond to our elevated status and expectations in the international community.”

Moon will stop by Honolulu on his way back home and take part in a ceremony for the transfer of the remains of South Korean and U.S. soldiers killed during the 1950-53 Korean War and award medals to independence fighters.

Park said the ceremony for the transfer of the remains “will be an opportunity to reaffirm the strong Republic of Korea-U.S. alliance and to make clear South Korea’s unlimited responsibility for those who have sacrificed themselves for our country."

The president will return to Seoul on Sept. 23.