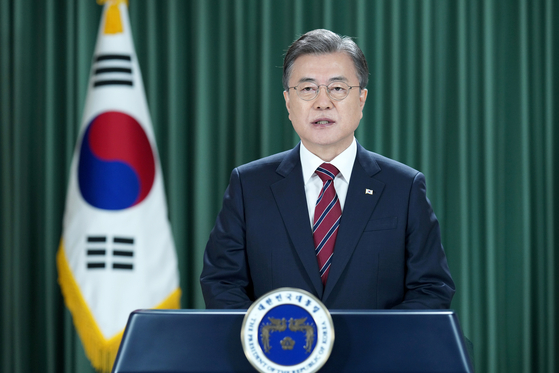 President Moon Jae-in gives a videoconference speech for a high-level meeting of the United Nations on Monday. Moon gave the address as the chair of the Mikta, a group of five middle powers. [YONHAP]


In a videoconference meeting with international leaders, President Moon Jae-in promoted Korea's decision to trust its people's willingness to respect social distancing, instead of enacting mandatory lockdowns, to cope with the coronavirus pandemic.

Moon gave a virtual speech at a high-level meeting to commemorate the 75th anniversary of the United Nations, hosted in New York on Monday. He gave the speech as the chair of a group representing five middle powers known by the acronym Mikta, which also includes Mexico, Indonesia, Turkey and Australia.

In his address, he stressed the importance of global cooperation, based on multilateralism and humanitarianism, in the fight against the Covid-19 crisis.

"The spread of Covid-19 was an extraordinarily difficult challenge for Korea as well," Moon said. "However, in a time of crisis, the Korean people chose the path that leads to freedom for all.

"The Korean government kept our people fully informed every step of the way, and in return, the people voluntarily put on face masks and actively practiced social distancing, based on the belief that I can be safe only when my neighbors are safe," Moon continued. "Moreover, we extended the scope of 'neighbors' beyond our borders. By sharing infectious disease prevention equipment with other countries without closing borders and shutting down certain regions, we were able to keep our country and economy intact."

"Korea's story is a tale of how, in the face of crisis, the people put into practice the universal values of humankind that the UN has championed — from freedom and democracy to multilateralism and humanitarianism," Moon continued.

"Solidarity and cooperation is a power unique to humans that a virus can never match," he said. "At the same time, it is the most potent weapon at our disposal that can defeat the coronavirus."

Moon proposed guaranteeing equitable access to vaccines and therapeutics, and said multilateralism in the international order must be restored. He also urged the world to pursue a path of "green recovery," arguing that more countries must join the "Global Green New Deal Solidarity," which seeks to address the climate crisis while creating jobs and enhancing inclusiveness.

Moon also promoted the efforts of Mikta countries to support the United Nations. He said the middle powers' cross-regional and innovative partnership will serve as a bridge between advanced nations and developing countries.

According to the Blue House, it was the first time that a chair of the Mikta gave an address in a UN event. During the 12-hour event on Monday, leaders from 180 countries gave video addresses.

Moon is scheduled to deliver another address at the UN General Assembly on Tuesday, which will be early Wednesday in Seoul time.

In the pre-recorded video address, Moon will seek the international community's support for the Korean government's initiative for peace on the Korean Peninsula and the region, the Blue House said last week.