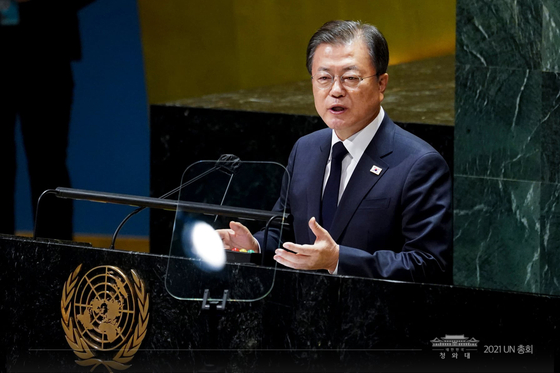 
President Moon Jae-in proposed that the two Koreas, the United States, and possibly China, formally declare an end to the 1950-53 Korean War in his address to the United Nations General Assembly on Tuesday.

"When the parties involved in the Korean War stand together and proclaim an end to the war, I believe we can make irreversible progress in denuclearization and usher in an era of complete peace," Moon told the United Nations in New York, in his final speech as South Korean president to the General Assembly with his five-year tenure set to wrap next May.

Moon has made similar proposals in past speeches to the UN, and in his 2018 address to the 193-member General Assembly said, "I look forward to seeing bold measures for denuclearization implemented among the related countries, leading to the declaration to end the war."

In his 2019 speech, Moon declared zero tolerance for war, guaranteed mutual security and co-prosperity as the three principles in resolving Korean Peninsula issues and called to "put an end to the longest-running armistice in human history and achieve a complete end to the war."

Moon more directly proposed an end-of-war declaration in his 2020 virtual address to the assembly, which he said will "open the door to complete denuclearization and permanent peace regime on the Korean Peninsula."

In this year's address to the 76th General Assembly, Moon also called for the speedy resumption of dialogue between the two Koreas and Pyongyang and Washington, stressing that peace on the peninsula begins with "dialogue and cooperation," pointing to agreements reached in inter-Korean and North-U.S. summits in 2018.

Moon added that North Korea also "must brace for changes that befit the era of global community."

This year marks the 30th anniversary of South and North Korea's admittance to the United Nations in September 1991.

By simultaneously joining the UN, the two Koreas "recognized that they were two separate nations different in systems and ideologies," said Moon, but added this was "never meant to perpetuate division."

He continued, "For when we acknowledge and respect each other, only then could we set out on a path to exchange, reconciliation, and unification."

Moon called for a "Korean Peninsula model," where the two Koreas and surrounding nations work together to establish peace on the Korean Peninsula and foster prosperity across Northeast Asia.

He also requested for speedy reunions of families separated in the Korean War and inter-Korean cooperation in regional platforms such as the Northeast Asia Cooperation for Health Security to better respond to infectious diseases and natural disasters.

Moon pledged to "make ceaseless efforts until my very last day in office" to build a "Korean Peninsula that promotes shared prosperity and cooperation."

He said that through the Green New Deal, South Korea is "turning its carbon neutrality commitment into opportunities to cultivate new industries and create jobs," and said that the government will "firmly back up the private sector in technology development and investment."

As the United Nations "ushers in this era of global community," said Moon, "the Republic of Korea will take an active part in the international order of solidarity and cooperation to be led by the UN."

U.S. President Joe Biden in his first address to the UN General Assembly since taking office said earlier Tuesday that Washington seeks for "concrete" progress toward the denuclearization of the Korean Peninsula through "sustained diplomacy."

"We seek serious and sustained diplomacy to pursue the complete denuclearization of the Korean Peninsula," said Biden. His administration has proposed unconditional dialogue, anytime, anywhere, but so far Pyongyang has not responded to such offers.

Biden continued, "We seek concrete progress toward an available plan with tangible commitments that would increase stability on the peninsula and in the region, as well as improve the lives of the people in the Democratic People's Republic of Korea," referring to the North by its official name.

With the end of the 20-year conflict in Afghanistan, Biden pledged a "new era of relentless diplomacy," and stressed that the United States will be prioritizing the Indo-Pacific region, alongside its allies, in what appeared to be an indirect reference to its rising tensions with China.

"And as the United States turns our focus to the priorities and the regions of the world," Biden said, "like the Indo-Pacific, that are most consequential today and tomorrow, we'll do so with our allies and partners, through cooperation at multilateral institutions like the United Nations, to amplify our collective strength and speed, our progress toward dealing with these global challenges."

Moon kicked off a five-day trip to New York and Hawaii Sunday.

The SDGs are a blueprint for fighting poverty and hunger, achieving gender equality, confronting the climate crisis and building a more sustainable future.

Korea plans to finalize its 2050 carbon neutrality plan by the end of October and submit its updated nationally determined contributions (NDCs) at the United Nations Climate Change Conference, or COP26, in Glasgow, Scotland, in November.

"Together with BTS, the first-ever, special envoy from the private sector, I hope today's gathering will serve as an opportunity to mobilize the future generations' good will and action towards sustainable development," said Moon. "Guided by the conviction that no one is safe until everyone is safe, the Korean people will join the journey of inclusive international cooperation as your most reliable, steadfast companion, 'leaving no one behind.'"

UN Secretary General Guterres in talks with Moon Monday expressed hopes for the resumption of dialogue toward sustainable peace on the Korean Peninsula.

Speaking at a conference in Vienna, Austria held at the same time as the UN General Assembly, International Atomic Energy Agency (IAEA) issued a warning Monday that North Korea's nuclear program "goes full steam ahead with work on plutonium separation, uranium enrichment and other activities."

The IAEA in a report last month said that since July, Pyongyang appears to have restarted operation of its reactor of its 5-megawatt reactor at its key Yongbyon complex that is widely believed to have produced plutonium for nuclear weapons.

Moon will stop by Honolulu and take part in a ceremony for the transfer of the remains of South Korean and U.S. soldiers killed during the Korean War Wednesday before he returns home Thursday.