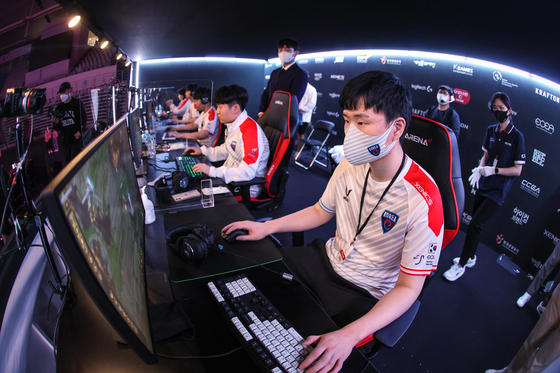 
China was the overall winner of the inaugural Esports Championships East Asia tournament on Sunday, winning three titles to Korea's two in the five-game tournament.

The inter-East Asian competitive gaming tournament arranged between Korea, China and Japan ran from Friday to Sunday, with all games taking place online due to Covid-19 restrictions.

As one of the most competitive esports in the world, and certainly in east Asia, the LoL competition was expected to be fierce. China entered the tournament looking like the favorite but Korea edged them out to take a hard-fought victory.


Korea also came out on top in PUBG, finishing second in the preliminary round but then beating China in the finals to take the title. The victory is a big one for Korea, where PUBG's popularity pales in comparison to LoL.

But despite Korea taking the two biggest titles, China's success in Clash Royale, PES and DFO secured their overall victory in the tournament. Korea finished second in both Clash Royale and Dungeon & Fighter, with Japan only reaching the final in PES.

With the overall victory, China got to lift the first-ever ECEA trophy.

"I believe this tournament, led by the Korea, China and Japan, will serve as a stepping stone for the development of esports, and I hope it will continue to offer a forum for the exchange of ideas for the international esports community," Korea's Minister of Culture, Sports and Tourism Hwang Hee said at the opening ceremony for the government-backed tournament.