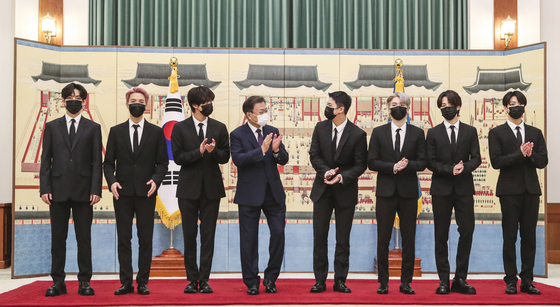 President Moon Jae-in, fourth from left, and members of BTS pose for a commemorative photo at the Blue House in central Seoul Tuesday in a ceremony appointing the boy band as a special presidential envoy for future generations and culture. BTS will partake in a session of the UN General Assembly headquartered in New York with Moon next week. [JOINT PRESS CORPS]


Boy band BTS will attend the 76th session of the United Nations General Assembly in New York next week as a special envoy of President Moon Jae-in.

Moon presented the BTS members with certificates appointing them as special presidential envoys for future generations and culture in a ceremony held at the Blue House Tuesday.

They are expected as special presidential envoys to expand communication and understanding with future generations around the globe, said the Blue House. 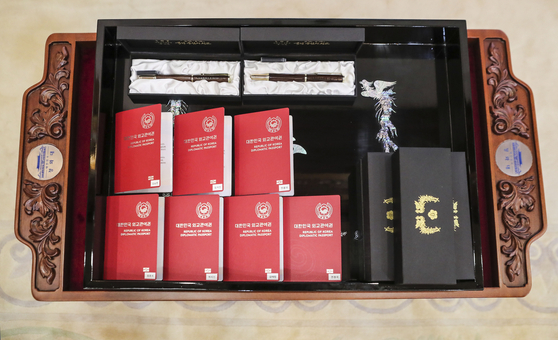 
Moon named BTS as special presidential envoy in July to "deliver a message of comfort and hope to young people worldwide" and "facilitate diversity, environment, and equality around the world," in an effort to bolster Korea's public diplomacy efforts.

BTS will officially begin its outreach activities as special presidential envoy for future generations and culture by attending the annual UN General Assembly session in New York next week, according to the Blue House.

Moon will depart on a five-day trip for the United States on Sunday to address the UN General Assembly for the fifth consecutive year. Last year, he made his keynote speech through video conference because of the Covid-19 pandemic. 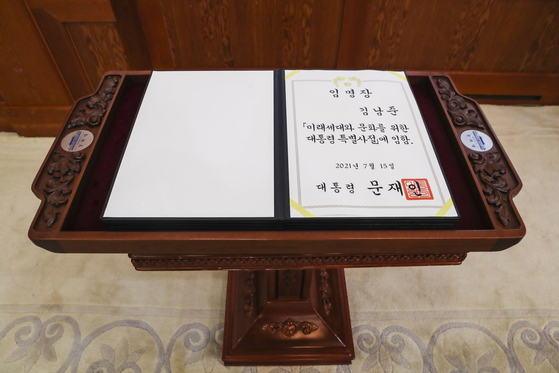 
The BTS members will also make a return to the podium at the United Nations.

BTS plans to give a speech at the second Sustainable Development Goals (SDGs) Moment event scheduled for Monday, convened by UN Secretary-General Antonio Guterres and attended by Moon, said the Blue House. The group will also give a prerecorded performance.

The SDGs are a blueprint for fighting poverty and hunger, achieving gender equality, confronting the climate crisis and building a more sustainable future.

The theme of the 76th General Assembly, which kicks off its high-level session next Tuesday, is: "Building resilience through hope — to recover from Covid-19, rebuild sustainability, respond to the needs of the planet, respect the rights of people, and revitalize the United Nations."

At the ceremony, Moon expressed his gratitude to BTS for becoming a special presidential envoy and for the members' contributions toward elevating K-pop and K-culture, and in turn "raising the dignity of the Republic of Korea," according to Park Kyung-mee, the Blue House spokesperson. Moon noted he has often spoken about BTS with world leaders as a natural icebreaker, contributing to Korea's diplomatic outreach efforts.

The band's leader Kim Nam-joon, better known as RM, speaking on behalf of BTS, said, "As an individual and a citizen of one country, it is a great honor to be able to do something with the title of a special presidential envoy for future generations and culture. We always thought about whether we could repay all the love we have received and give back at the same time, and we are honored that the president has given us such a great opportunity and will work hard as special envoys."

"As BTS has delivered messages of comfort and hope to the entire world, their attendance of the UN General Assembly this time is expected to serve as a meaningful opportunity to expand communication with future generations around the world and draw their sympathy on major international issues," the Blue House said in a statement.

Moon last met with BTS when the members delivered a motivational speech to mark Korea's inaugural Youth Day in a ceremony held at the Blue House in September 2020. 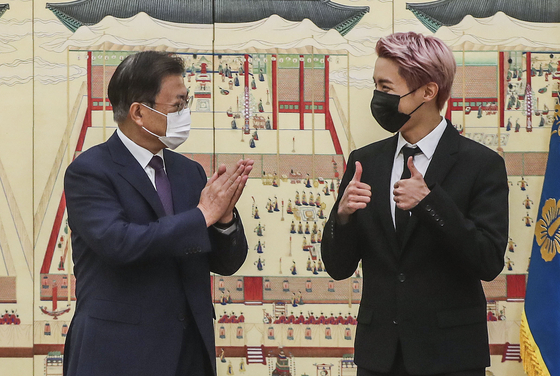 
BTS has also addressed the United Nations in past years.

On Sept. 24, 2018, BTS made history becoming the first K-pop group to speak at the UN General Assembly, in an effort to help launch Unicef's Generation Unlimited program, to promote the education and employment of young people.

RM gave a speech in English on the theme of "Speak Yourself," enforcing a message about self-empowerment and love. South Korea's First Lady Kim Jung-sook also took part in the event.

Last year, BTS delivered a speech virtually for the 75th session of the UN General Assembly, sending a message of hope and reassurance to encourage people to continue living on despite the current hardships amid the pandemic.