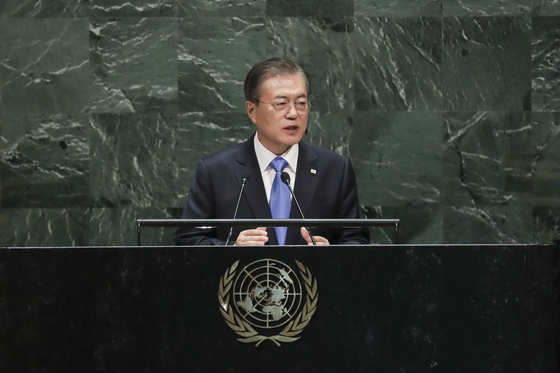 In this file photo, President Moon Jae-in gives a speech at the United Nations General Assembly in New York on Sept. 24, 2019. [YONHAP]

According to Blue House spokesman Kang Min-seok, Moon will participate in a videoconference of the UN General Assembly on Tuesday, New York time. A pre-recorded video address by Moon is scheduled to be aired around 2 a.m. Wednesday, Seoul time.

The UN decided to hold the 75th session of the General Assembly via video link due to the coronavirus pandemic. It invited world leaders to submit pre-recorded videos of speeches that will be livestreamed. According to Kang, 120 heads of states and 53 global leaders of the 193 UN member states plan to participate.

Speculation is high that Moon will use the speech to make a new proposal to North Korea to improve deteriorated inter-Korean relations and possibly make a breakthrough in North Korea-U.S. relations.

Last year, Moon proposed to transform the Demilitarized Zone (DMZ) between the two Koreas into an international peace zone with the help of the UN.

That proposal was snubbed by the North.

A presidential aide said Thursday it is premature to discuss details of Moon’s message to the North in the upcoming speech.

Moon is also scheduled to participate in a high-level meeting to commemorate the 75th anniversary of the UN session.

At the meeting, Moon will give a speech as leader of a group of cross-regional middle powers known as Mikta. The five-member group was launched in 2013 and its other members are Mexico, Indonesia, Turkey and Australia. It is the first time that the Mikta leader will give a speech at an international event since its establishment.