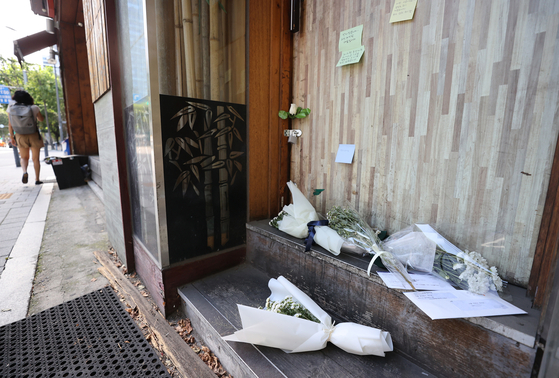 Flowers and hand-written notes are left to mourn the 57-year-old restaurant owner who was found dead Sept. 7. [YONHAP]


Self-employed business people are finding it so hard to get through the pandemic that some are giving up.

A 52-year-old owner of an adult entertainment establishment in Wonju, Gangwon, was found dead at home Monday, according to Wonju Police Station, Gangwon, on Wednesday.

Media reported that the establishment’s rent was raised a few months ago and the business owner, whose gender wasn't specified, wasn’t able to afford it for months.

On Sept. 7, a 57-year-old who ran a restaurant in Mapo District, western Seoul, was found dead, apparently committing suicide. That business person was reportedly struggling to pay rents and employees' paychecks for months.

Another person who ran a fried chicken restaurant in Yeosu, South Jeolla committed suicide on Sept 12, leaving a note that read, “I’m struggling financially. I want to say I’m sorry to my parents.”


People are mourning by visiting the restaurants of the business owners who felt compelled to take their own lives. Flowers and hand-written notes can be seen in front of the 57-year-old restaurant owner's restaurant in Mapo. They read, "Rest in peace," and, "I hope you rest well in heaven without having to worry about money."

Fellow business owners have been going on Naver's online community website Naver Cafe and uploading posts and comments offering condolences and encouraging other business owners to cheer up.

The National Self-Employee Emergency Response Committee, a group supporting the self-employed during the pandemic. says there have been more such suicides, but they have not been reported by the media or made public by the victims' families.

According to the committee on Tuesday, 1,000 stores shut down on average every day since the pandemic began. The combined debt of self-employed business owners reached 66 trillion won ($56.4 billion) during the period, it claimed.

A Statistics Korea report released Wednesday showed how many people are struggling.

As of August, Korea had 1.3 million self-employed business owners who hire workers — 61,000 fewer than a year ago, or a 4.5 percent on year drop. That figure has been shrinking for 33 consecutive months since December 2018.

Organizations are calling the government to ease social distancing measures, the biggest cause of distress for small businesses like eateries and bars.


Restrictions on operating hours and size of parties have taken a toll on many businesses, reducing the number of customers and slashing revenues.

The National Self-Employee Emergency Response Committee and Korea Federation of Micro Enterprises (KFME) held a press conference Tuesday offering their condolences for the businesspeople who have died.

The two associations made several requests of the government, including abolishing restrictions on operating hours, extending loan maturities for small firms and merchants and paying compensation for small business owners for losses during the pandemic.

The organizations blamed the strict social distancing measures and asked for quick implementation of the “With Corona” plan, a new way of dealing with the pandemic similar to the "With Covid" strategy discussed in other countries. It is supposed to puts less emphasis on the number of daily infections while focusing more on managing severely-ill patients, and ratchet down the social distancing restrictions.

“It has been a while since the ‘With Corona’ scheme was mentioned and the vaccination rate has been on the rise, but social distancing measures still require small business owners and self-employed people to sacrifice [their businesses],” said Kim Ki-hong, co-president of the committee for small businesses. “The government needs to shift its Covid-19 policies to implement the ‘With-Corona’ strategy, ensuring small businesses the freedom to operate.“

The rules vs. humanity