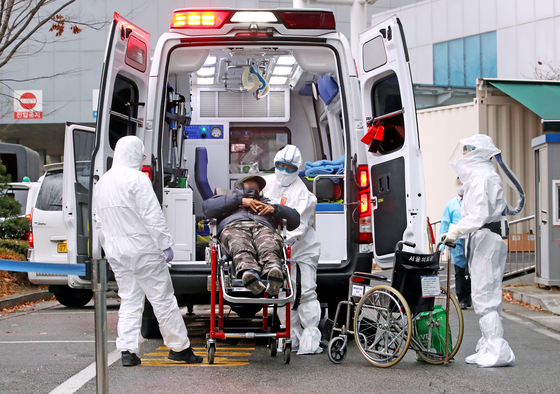 Medical staff in protective gear unload a patient infected with Covid-19 at the Seoul Medical Center in eastern Seoul on Tuesday. [YONHAP]

The number of patients in critical condition hit a record 661 on Tuesday, a rise by 31 from the previous day. Of them, people aged 60 or older accounted for 84 percent.

Amid a surge in critical cases, Seoul had only 31 ICU beds available as of 5 p.m. Monday, the Health Ministry said, bringing the occupation rate to 91 percent.

The capital city’s five largest hospitals — widely known as the “Big Five” — had only six ICU beds left as of Tuesday morning. A total of 14 beds were available until the day before, but more than half were filled up in a day.

Gyeonggi had 33 ICU beds left and Incheon 13. Together, Gyeonggi, Incheon and Seoul are considered Greater Seoul, or the Seoul metropolitan area.

“We are in an emergency situation,” Prime Minister Kim Boo-kyum said in a Cabinet meeting on Tuesday, urging people to cancel or postpone meetings to prevent the virus's spread.

The country reported 3,032 new Covid-19 cases, the highest figure ever reported on a Tuesday, raising the total caseload to 447,230.

Forty-four more people died of the virus, bringing the death toll to 3,624.

Of the fatalities, Korea confirmed the first death of a child under the age of 10.

The child, who had an underlying disease, was confirmed to have been infected with the coronavirus after death, the Korea Disease Control and Prevention Agency (KDCA) spokesperson Ko Jae-young said in a briefing.

Korea reported its first Covid-19 fetal death on Nov. 22, after a 24-week pregnant woman who was diagnosed with the virus delivered a stillborn baby prematurely, which tested positive.

However, the country excluded that case from its Covid-19 statistics as the fetus died before birth registration. 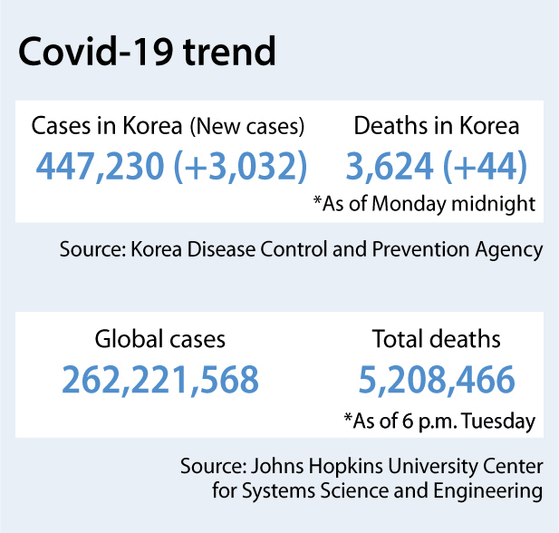 Amid fears over the variant first discovered in South Africa, health authorities said they are studying two travelers who tested positive for the coronavirus after traveling from countries with confirmed cases of the Omicron variant.

In a briefing on Tuesday, officials said they are analyzing two Covid-19 patients in Ulsan through a genome-wide analysis to find whether they are infected with the Omicron variant.

No Omicron-variant cases have been reported in Korea so far.

The two confirmed patients in Ulsan entered the country from the Netherlands and Germany, where Omicron cases have been found, on Nov. 28 and Nov. 29.

Although the bar is currently put on eight countries, health authorities said they plan to heighten the entry threshold for more countries after closely monitoring the risk level and the variant transmission in each country.

However, officials noted that Korea probably won’t be able to ban entry from all countries where Omicron cases are found.

“If the Omicron variant spreads around the world, all foreign inbound travelers would be coming from countries with confirmed cases of the variant,” Park Young-joon, head of the epidemiological investigation team at the Headquarters, told reporters on Tuesday.

“We are initially dealing with African-related countries,” Park said. “We will increase testing of those coming from risk countries, and also randomly test entrants from other countries.”

Meanwhile, the Foreign Ministry announced that Korea shipped 539,000 doses of the AstraZeneca vaccine to the Philippines on Monday to help the country battle rising infections.

This marks the fourth vaccine donation made by Korea, following ones made to Vietnam, Thailand and Iran. All donations were AstraZeneca vaccines.