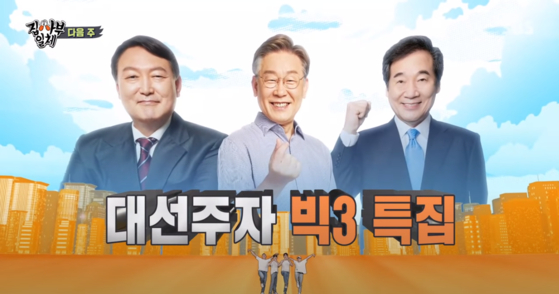 Presidential candidates, from left, Yoon Seok-youl, Lee Jae-myung and Lee Nak-yon will star in episodes of SBS's ″Master in the House.″ [SCREEN CAPTURE]


“Just think of me as an older brother,” former prosecutor general-turned-presidential candidate Yoon Seok-youl said on the SBS variety show “Master in the House.”

Yoon is set to appear in episode 187 that will air Sunday, but it is already making headlines. The one minute and 20 second teaser video uploaded to YouTube shows Yoon cooking, doing impressions and being asked sensitive questions like “Do you feel like fighting the president whenever you see him?” and “What do you think about Choo Mi-ae [former Justice Minister who had frequent political rifts with Yoon]?” 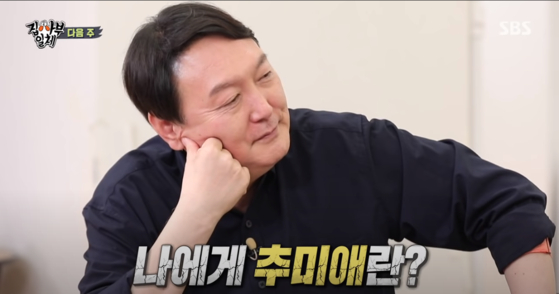 Former Prosecutor General Yoon Seok-youl was asked, “What do you think of Choo Mi-ae?” in an episode of ″Master in the House.″ Choo is the former Justice Minister who previously had frequent political rifts with Yoon. [SCREEN CAPTURE]


It is the People Power Party presidential candidate’s first time to appear on a variety show. The production crew for “Master in the House” has revealed that other presidential candidates including ex-Prime Minister Lee Nak-yon and Gyeonggi Governor Lee Jae-myung will be on later episodes of the show as well. “Master in the House” is a program where reputable figures make guest appearances to talk about their life stories and give advice.

Politicians starring on variety shows is a relatively recent phenomenon which has been happening since about 2011. Before that, using television entertainment as a political tactic dates back to 1988. It was only after Roh Tae-woo, the 13th president of Korea who served from 1988 to 1993, was elected that political satire was tolerated in the media. Still, such satire was kept within the line of comedians making impressions of the former president and politicians during that time.

“When Ahn Cheol-soo [the current head of the minor opposition People’s Party] appeared on ‘Knee Drop Guru’ [a famous MBC talk show that aired from 2007 to 2013],” pop culture critic Jeong Deok-hyun said, “viewers immediately wanted him to enter politics, even though he was the dean of the Graduate School of Convergence Science and Technology at Seoul National University at the time. It was then that politicians started perceiving variety shows differently.”

The following year in 2012, then-presidential candidates Park Geun-hye and Moon Jae-in made rare guest appearances on an episode of SBS’s talk show “Healing Camp” (2011-16), which also caught the public’s attention. 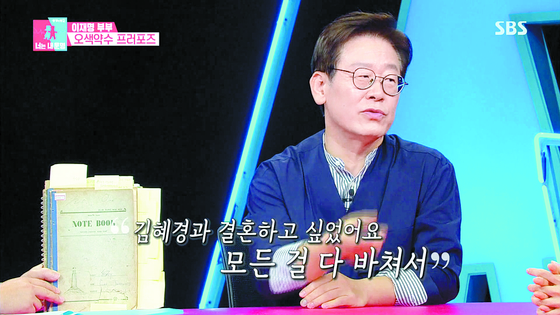 Back in 2017, when Gyeonggi Governor Lee Jae-myung was serving as the Mayor of Seongnam, he and his wife starred in the second season of the SBS show “Same Bed, Different Dreams,” as one of many other celebrity couples on the show portraying their everyday lives. [SCREEN CAPTURE]


Afterward politicians began appearing on variety shows more frequently. Back in 2017, when Gyeonggi Governor Lee was serving as the Mayor of Seongnam, he and his wife starred in the second season of the SBS show “Same Bed, Different Dreams,” as one of many other celebrity couples on the show portraying their everyday lives.

The reason so many politicians are flocking into the entertainment scene is because it is an effective way to enhance their reputation. Currently, variety shows are seizing the entertainment industry — only seven dramas are being aired on terrestrial television (KBS, SBS, MBC) while there are as many as 48 variety shows, an example of how much viewers enjoy this genre. To politicians, potential presidential candidates in particular, variety shows are a means to look good to the general public, and promote themselves to earn votes. The same benefits go to broadcasting companies — getting front-running, influential candidates on their shows boosts publicity.

Another important factor is “image making.” “Appearing on variety shows helps politicians show their down-to-earth side and establishes a friendly image to the public,” another pop culture critic Ha Jae-keun said. “Ahn is the classic example. He proved a hit with his easygoing charm, so the other politicians began to search for a spot in the entertainment industry, seeking similar success.”

According to a 2012 research by communication and media Professor Shin Jae-woong at Sookmyung Women’s University, “'Healing Camp’ influenced viewers to learn about the personal sides, political ideas and life stories of the candidates who appeared on the show. This led to viewers’ heightened interest in politics and eased some of the negativity toward it.” 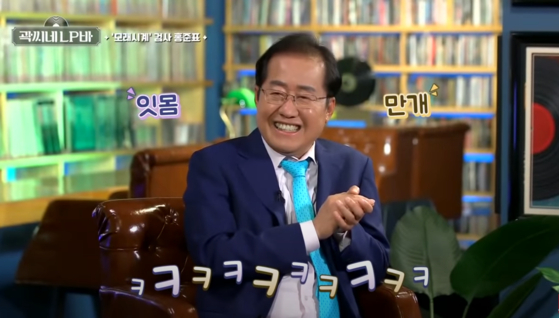 
Still, some critics have concerns about these political excursions into the entertainment business.

“It is good for politicians to build credibility on a personal level with the public, but on the other hand I fear [politics] will end up being all about the image [of the politicians] displayed through the media,” said Jeong. “A politician might be pledging groundless policies but still get elected because he has a likeable image. It’ll just be the people [of the country] that get damaged by that mistake. Variety shows tend to present the audience with only nice features, making it more difficult to get a grasp of the politicians’ political worth.”

There is no proof yet as to whether variety shows directly sway votes. Professor Shim, in the aforementioned research, explained that “watching ‘Healing Camp’ did not correlate to voting for [the candidate that starred in it] at the presidential election.”

Meanwhile, presidential candidates for the 2022 election are permitted to go on variety shows until Dec. 9. A regulation under the Broadcasting Act states that candidates are not allowed to appear on television shows, except for debate programs and other programs that comply with the election law, from 90 days before the election. Videos and voice recordings of candidates that give the impression of having them on a show are also not allowed. The 20th presidential election will be held on March 9, 2022.