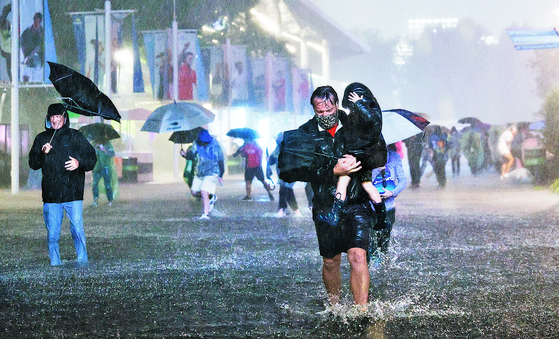 CHUN IN-SUNG
The author is director of the EYE Team at the JoongAng Ilbo.


“This is Code Red. The nation and the world are in peril,” said U.S. President Joe Biden when he visited Queens, New York in the aftermath of the flood on September 7. He mentioned “code red,” a warning for emergency situations in hospitals, emphasizing the danger of global warming and climate disasters.

In fact, when hurricane Ida landed on Louisiana late last month, it was expected to weaken after making landfall just like other hurricanes. As it moved northward, however, it gathered more clouds and brought heavy rain and tornados. On the flood that killed more than 60 people, the New York Times wrote that hurricanes occur more frequently as a result of global warming, and as heated air contains more moisture, heavy rains became more intense.”

When U.S. President Biden visited the recovery site, he said that more than 100 million Americans were affected by extreme weather this summer alone and climate change is an existential threat to American lives and economy. According to the U.S. Federal Emergency Management Agency, more than 400 people died in floods, heat waves and wildfires in the U.S. between June and August. Superpowers like the U.S. are not exempt from climate disasters.

Another Code Red warning came out a month ago. UN Secretary General Antonio Guterres appealed to countries around the world to stop greenhouse gas emissions.

On the other hand, the Korean government and politicians are insensitive to these warnings. Presidential candidates are no different. Civil groups asked 19 prospective candidates about the post-coal era. Only five gave a specific answer on the timing. Others showed support but five, including Gyeonggi Gov. Lee Jae-myung and former Prosecutor General Yoon Seok-youl, remained silent on executing timing, and nine, including Lee Nak-yon and Hong Joon-pyo, did not share their views.

On the day that Biden spoke of Code Red, Christian leaders, including the Catholic Church’s Pope Francis, the Anglican Church’s Archibishop Justin Welby of Canterbury and the Orthodox Church’s Bartholomew, released an unusual joint statement. Regardless of religion and politician stance, they demanded people listen to the cry of the earth because now is a decisive moment.

Climate disaster cannot be prevented by individual efforts such as using reusable tumblers or recycling waste. It is a problem to be solved by politics and economy. Politicians dreaming to become a head of state must start thinking about a climate promise that can encompass the government, businesses and civil society.