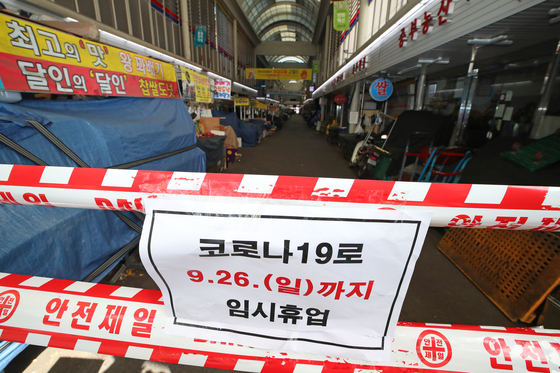 The Jungbu Traditional Market in Jung District, central Seoul, the site of a recent Covid-19 outbreak, is shut down on Sunday morning. [YONHAP]

The country recorded 3,272 cases on Friday, an all-time record. The Chuseok holidays, in which families traditionally gather, were earlier that week on Sept. 20, 21 and 22.

"The cases may only rise from here, as the people who have traveled over the Chuseok holidays and have become infected may continue to grow," said Lee Gi-il, a senior official of the Ministry of Health and Welfare in a press briefing last Friday.

Most of the cases reported Friday and Saturday appeared to be concentrated in the greater Seoul area, or Seoul, Gyeonggi and Incheon.

The rate of increase in infections was higher outside the greater Seoul area, likely a result of Chuseok travelers to those regions.

In the regions outside of the greater Seoul area, the average number of daily infections grew 17.3 percent.

Two more long weekends are coming soon: National Foundation Day next Sunday and Hangul Day on Saturday, Oct. 9. The government has designated the following Mondays as substitute public holidays. The Korean government by law designates weekday holidays for all public holidays that fall on weekends.

"We request that you cancel or postpone private meetings for at least two weeks in the future, and refrain from using public facilities where it is difficult to wear a mask," said Jung Eun-kyeong, commissioner of the KDCA, during a press briefing on Friday.

She noted that many cases were stemming from private gatherings.

In both clusters, the first cases were traced to groups of workers at the market who shared common spaces such as bathrooms or cafeterias.

On Saturday, South Chungcheong added 75 new cases, of whom 33 were foreign citizens. They included eight foreigners studying at a university in the province and six foreign workers on a construction site in Cheonan.

As of Saturday, Korea recorded a total of 301,172 Covid-19 cases, with 30,582 patients being treated in hospitals and other facilities. Of them, 320 were in critical condition. About 48.9 percent of intensive care unit beds throughout the country were in use, according to the Health Ministry. 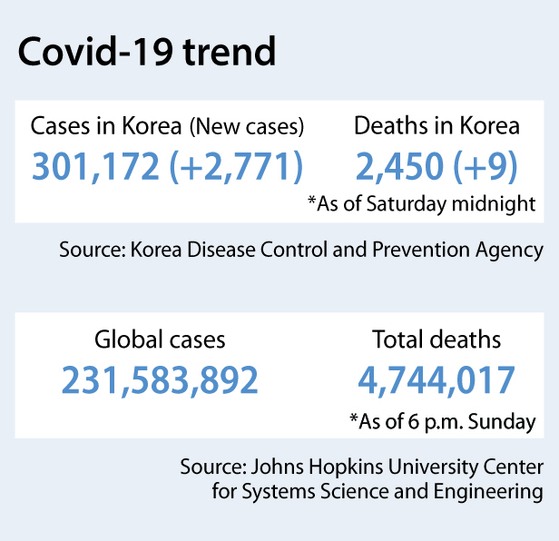 The KDCA was scheduled to make an announcement Monday on expanding the vaccination programs to include people aged between 12 and 17 and women who are pregnant.

"I understand that many parents are concerned about the vaccine's possible side effects on the youth," said Prime Minister Kim Boo-kyum during a meeting on Covid-19 at the central government complex in Seoul on Sunday. "But the KDCA will work closely with educational authorities to communicate effectively with the students and the parents."

A total of 74.1 percent of the population has been given their first shot of vaccines, and 45.2 percent was fully vaccinated as of Saturday.

Korea is officially in its seventh Covid-19 wave