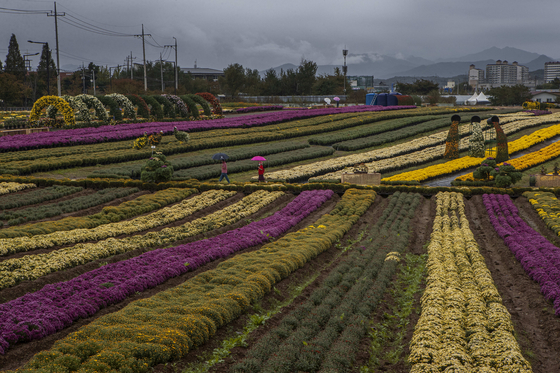 Rows of pink and yellow chrysanthemums are seen in Yeoncheon County, Gyeonggi, on Friday. The Chrysanthemum Exhibition was scheduled to open Friday, but was cancelled due to the fourth wave of the Covid-19 pandemic. A total of 150,000 chrysanthemums have been planted since May. [YONHAP]


From local dishes and flora to dances and sunsets, festivals in Korea are a cultural bonanza reflecting a rich history and unique traditions.

After many festivals were shut down last year because of the coronavirus, hopes were high earlier this year when the number of daily infections stabilized.

However, just as the nation’s health authorities announced that they were considering a new “With Corona” set of policies in August, Covid-19 infections surged again. Fall festivals that had been preparing to open were forced to cancel their events once again.

After two years of rest, the annual Cheongwon Life Festival in Ochang town, North Chungcheong, was all set for a grand opening scheduled for this weekend.

The local government was expecting about 4 billion won (around $3.3 million) worth of profit from this year’s festival.

But when daily infections skyrocketed two months ago with no signs of going down, the festival committee was left with no other choice but to cancel.

“After we cancelled, the festival was left with massive amounts vegetables and fruits,” said Yoo Yong-cheol, Cheongju city’s department of eco-friendly crops. “We ended up donating them to eight local food banks.”

As trips abroad have been limited, many families were counting on going to fall festivals during October’s two long weekends.

“Unfortunately, most festivals around the nation have been cancelled," said Jo Yeon-hwa, 56. "So I am at a loss as to where to go for our family’s fall outing.”

According to the Central Disaster and Safety Countermeasures Headquarters, the number of local festivals in October has shrunk from 207 to 158, and 145 of them will be held online.

The Chrysanthemum Exhibition in Yeoncheon County, Gyeonggi, was cancelled after workers planted 150,000 chrysanthemums over 30,000 square meters of land since May.

“We increased the number of chrysanthemums by tenfold this year compared to last year but had to cancel the exhibition due to Covid-19,” said Lee Seung-il, head of the agricultural sciences department of Yeoncheon County.
“I am deeply saddened by the fact that we cancelled an exhibition that greatly boosts the county’s economy.”

A total of 13 out of 23 fall festivals in the Gangwon area, a popular fall season destination, also were either cancelled or postponed.

Some of the famous festivals that have been cancelled in Gangwon Province include the Gangeung Coffee Festival, the Wonju Dynamic Dancing Carnival, the Goseong Pollack Festival and the Yangyang Salmon Festival.

Experts predict that traditional local festivals may take on new, diverse forms as an effect of the Covid-19 pandemic.

“Since Covid-19, a majority of the festivals have adopted a hybrid model of hosting events both online and offline,” said Jeong Kang-hwan, director of the graduate school of tourism of Pai chai University.

“It would be in the local festivals’ best interests to organize online events for people in their 20s and 30s, who have the highest participation rates in online festivals, then also, plan on-site festivals for the older generation as more offline festivals will be allowed after the country adopts the ‘With Corona’ strategy.”

It’s not over until it’s over (KOR)

It’s not over until it’s over