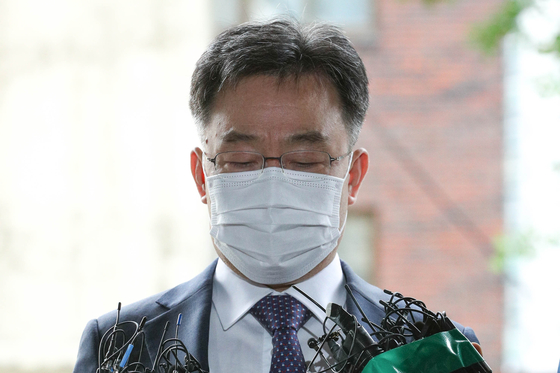 Kim Man-bae, owner of Hwacheon Daeyu - a company suspected of receiving political favors and reaping outsized profits from a development project in Seongnam, Gyeonggi through an alleged connection with Gyeonggi Governor Lee Jae-myung -- reports to the Yongsan Police Precinct in central Seoul for questioning on Monday. [NEWS1]


A development scandal engulfing Democratic Party (DP) presidential frontrunner and Gyeonggi Governor Lee Jae-myung crossed party lines on Sunday after media reported that the son of an opposition lawmaker received a fat severance package from a company at the center of the controversy.

Kwak’s son reportedly received 5 billion won ($4.2 million) in severance pay in March from Hwacheon Daeyu after working there for about seven years.

The company joined a 1.15-trillion-won project to develop 968,890 square meters (239 acres) in Daejang-dong in Seongnam, Gyeonggi as residential real estate. Since 2019, Hwacheon Daeyu allegedly received a profit of 57.7 billion won on an investment of 49.95 million won – an outsized gain compared to its relatively small 1 percent stake in the project.

At the time, Lee touted the development as one that would create housing for 5,903 families.

Hwacheon Daeyu’s huge gains has led to growing suspicion that Lee gave business favors to the company. Allegations have focused in particular on the company’s owner, a retired journalist named Kim Man-bae who interviewed Lee in 2014.

Kim was summoned to Yongsan Police Precinct as a witness in the case on Monday. He claimed on Sept. 14 that he has no special relationship with Lee, and that the company actually saw losses in the joint public-private project.

After reports of Hwacheon Daeyu’s profits broke earlier this month, the PPP submitted a bill to the National Assembly on Thursday that would launch an independent counsel probe. The bill was signed by 107 lawmakers from the main opposition People Power Party (PPP) and the minor conservative People’s Party (PP).

The party leaders also submitted a proposal for a parliamentary probe, separate from an independent counsel probe, which is usually led by a prosecutor.

Lee has denied the allegations, which his campaign has called “groundless.” 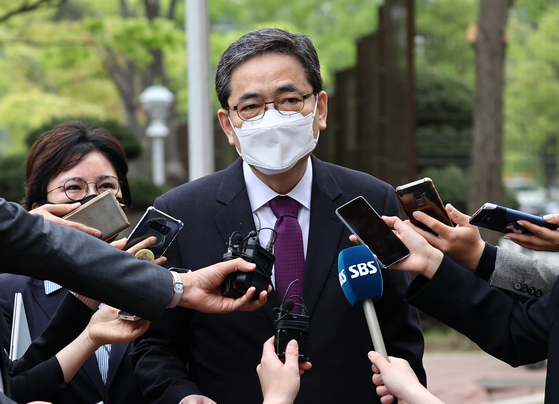 Kwak Sang-do, a People Power Party (PPP) lawmaker who resigned from the party on Sunday after media reported his son received a massive severance payment from Hwacheon Daeyu. [YONHAP]


In a twist, however, the controversy has now spread to the opposition party spearheading the push to investigate the allegations against Lee after it was revealed the son of one of its own lawmakers was involved in the company.

Attention has focused on Kwak’s 31-year-old son, who received the massive severance payment in January after seven years’ employment as a mid-level employee at the company.

The amount of money that Kwak’s son received was more than 200 times his legally entitled retirement payment when considering his reported monthly salary of 2.5 million won.

News of his son’s disproportionate severance payment placed Kwak in the position having to explain his family’s involvement in the company and the development project.

There are now suspicions that Kwak himself invested in Hwacheon Daeyu under a different person’s identity, and that his son's severance payment was an illegal payout for his investment. Both Kwak and his son denied the accusations.

Expressing concern for the party’s reputation in the lead-up to the March presidential election, Kwak tendered his resignation to the PPP, and his membership was terminated on Sunday.

“While a later investigation will reveal the extent of Kwak’s legal responsibility, the PPP feels a heavy sense of responsibility and political accountability as [the issue] concerns a public figure,” PPP floor leader Kim Gi-hyeon said Sunday after an emergency leadership meeting.

However, Kwak’s departure did not stop Kim from continuing to apply pressure on Lee and insisting the governor played a central role in the scandal. Kim also claimed Sunday that another employee at Hwacheon Daeyu also received a similarly disproportionate severance payment.

The allegations against Kwak’s son have invigorated Lee’s campaign’s defense, which has now gone on a counter-offensive by filing a criminal complaint Sunday against the PPP lawmaker, who is a vocal critic of President Moon Jae-in and the ruling party.

In the complaint, Lee’s campaign accused Kwak of spreading false information that the governor was the mastermind behind the Daejang-dong development project’s profit distribution plan and the main beneficiary of Hwacheon Daeyu’s profits.

Lee himself on Sunday wrote in a Facebook post that he harbored suspicions that the severance payment Kwak’s son received was an indirect bribe to Kwak for his role in “the Park Geun-hye administration and the PPP’s disruption of a public development project led by Seongnam city.”

Kwak served as the Blue House senior secretary for civil affairs under the Park administration.

The governor also called Kwak “cowardly,” describing him as “a lizard that is still a lizard even if its tail is cut off.”

Continuing his opposition to the PPP’s push for a parliamentary probe or an independent counsel investigation – which his campaign described as “consuming political energy” – Lee again proposed that the allegations into the development controversy should be handled by either the state prosecution service or the Corruption Investigation Office for High-ranking Officials (CIO).

Meanwhile, Lee Nak-yon, former DP chairman and prime minister and Lee's main rival for the party’s presidential ticket, said in a radio interview Monday that a full picture of the Daejang-dong development project was slowly coming into focus.

Lee emphasized the need for a fact-finding process independent from politics.

He likened the situation to an elephant where “the legs and ears are being revealed,” suggesting that while the allegations are substantial, there remains much to be explained.