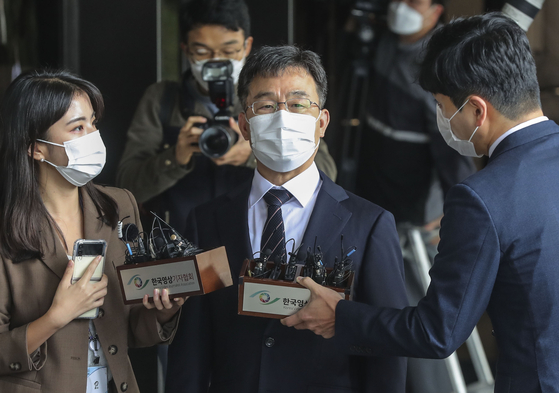 Kim Man-bae, either the owner or a major shareholder of Hwacheon Daeyu, arrives at the Seoul Central District Prosecutors' Office in Seocho District, southern Seoul on Monday morning for questioning as a suspect in the Daejang-dong development scandal. [KIM SEONG-RYONG]


The owner of a small asset management company at the center of the land development scandal in Seongnam, just south of Seoul, was summoned for questioning as a suspect by prosecutors.

Kim Man-bae, who has been described as either the owner or a major shareholder of Hwacheon Daeyu, a small asset management company at the center of the Daejang-dong project, was summoned by prosecutors for questioning on Monday morning.

Hwacheon Daeyu is suspected of receiving political favors in the development’s profit distribution scheme, which enabled it since 2019 to rake in a profit of 57.7 billion won ($48.3 million) on an investment of 49.95 million won, which was a 1 percent stake in the project.

As he arrived at the Seoul Central District Prosecutors' Office at 9:50 a.m., Kim Man-bae apologized to reporters gathered outside for the controversy, adding, “I will faithfully cooperate with the prosecution's investigation.”

When asked if he was the owner of the company Cheonhwa Dongin No. 1, whose ownership has been cloudy, he simply said, “I am.”

However, Kim denied that profit distribution from the Daejang-dong project was as illicit as it seemed in recordings submitted to the state prosecution service by Jeong Young-hak, an accountant who owned Cheonhwa Dongin No. 5.

According to a source in the prosecution service, Kim and others can be heard on the recordings discussing the distribution of profits from the project as well as delivering a payment amounting to 1 billion won to an insider at the Seongnam Development Corporation.

“The various allegations have arisen because recordings [of conversations] were intentionally edited by one particular person during a conflict over the distribution of profits,” Kim told reporters.

Kim also denied that illegal transactions had taken place, saying, “Once the prosecution thoroughly investigates the deposits and withdrawals of funds, many of the current suspicions will be resolved.”

Kim’s role in the Daejang-dong development’s controversial profit distribution scheme was the spark that lit the political firestorm over the project.

The development was once touted by ruling Democratic Party (DP) presidential nominee and Gyeonggi Governor Lee Jae-myung as a project that would provide apartments for 5,903 families in the Seoul-Gyeonggi metropolitan area, home to over one-fifth of South Korea’s population.

However, reports of Hwacheon Daeyu’s outsized profits, and the comparatively small slice of profits gained by the public company that held a 50 percent stake in the development consortium, aroused suspicions that the small asset management company benefited from a cozy relationship between Lee and Kim, a former journalist who interviewed the governor in 2014.

Yoo Dong-gyu, the former acting president of the public Seongnam Development Corporation, has already been arrested on suspicion of designing the shareholder composition and profit distribution method of the mixed public-private Seongnam Park consortium, the developer of the Daejang-dong project, to favor Hwacheon Daeyu and its affiliates Cheonhwa Dongin No. 4 and No. 5.

However, it remains unknown what role – if any – that the Gyeonggi governor played in the development’s investment and profit distribution structure.