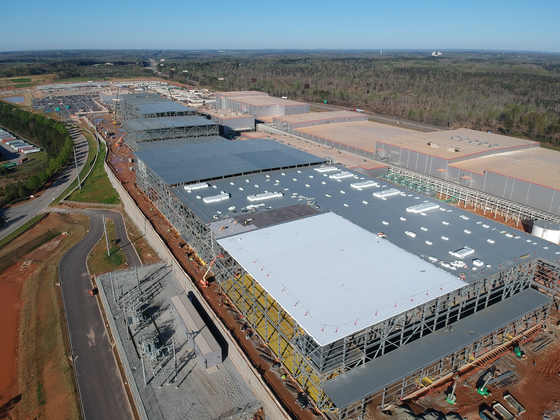 Ford also announced it will invest another 2.8 trillion won to build an electric truck assembly near one of the battery plants.

Through a joint venture by the two companies called BlueOvalSK, SK Innovation and Ford will each invest 5.1 trillion won to build the battery plants, which are expected to start production in 2025.

This is the biggest single investment made by Ford in its 118-year history, and SK Innovation's biggest too.

BlueOvalSK will build one battery factory in Tennessee and the remaining two in Kentucky. Each factory will have production capacity of 43 gigawatt-hour (GWh).

Ford’s electric truck assembly plant will be built next to the BlueOvalSK battery plant in Tennessee .

The combined production capacity of the three new battery-making locations, 129 GWh, is enough for 2.1 million EVs with 60-kilowatt batteries.

The joint venture had promised 60 GWh of battery manufacturing capacity early this year, but decided to more than double the capacity, citing increased demand for EVs in the United States on the back of green policies of the country’s president, Joe Biden.

“We are proud to be partnering with Ford as they open a new chapter in automobile history,” said Jee Dong-seob, head of SK Innovation’s battery business in a release Tuesday.

"We are excited to be taking this decisive leap together, as partners, and to bring about our common vision for a cleaner planet.”

With the three new factories, SK Innovation will have five manufacturing facilities in the United States with combined manufacturing capacity of 150 GWh.

The Korean petrochemical-battery company has two factories under construction in Georgia. One will have production capacity of 9.8 GWh and the other 11.7 GWh.

That 150 GWh manufacturing capacity is the biggest of all battery makers doing business in the United States.

LG Energy Solution, the world’s second biggest EV battery supplier after China's CATL and a rival of SK Innovation, is constructing two factories in Ohio and Tennessee with partner General Motors that will have combined manufacturing capacity of 70 GWh. A total of 5.4 trillion won has been invested in them.

LG Energy Solution is promising to build another facilities that have 70 GWh manufacturing capacity by 2025 through an investment of 5 trillion won.

SK Innovation said it expects to have manufacturing capacity of 200 GWh by 2025 at plants around the world including in China and Europe.

Samsung SDI is also planning to build a battery plant in the U.S., but hasn’t confirmed specifics.