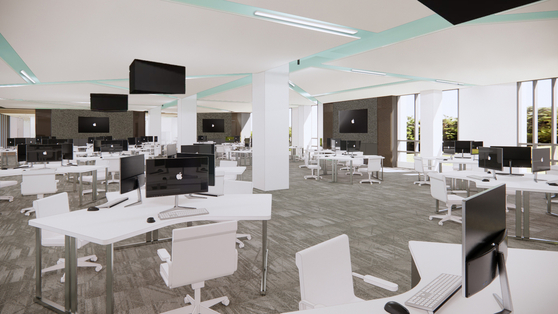 The moves, announced by the U.S. smartphone maker on Monday, are part of 100 billion-won worth of commitments it made to the Korea Fair Trade Commission in February after it was caught improperly forcing repair and promotion costs onto Korean telecom companies.

The antitrust agency sometimes strikes such an agreement instead of imposing a fine.

The center will be located at Postech in Pohang, North Gyeongsang, the leading science and technology focused university in the region. Postech and Apple will jointly run the center.

Apple said Monday that the center is its first support center for local SMEs.

The tech giant will also run a training program called Apple Developer Academy for aspiring developers and software engineers in collaboration with Postech.

The nine-month program will select 200 trainees every year. It aims to open next year.

According to the plan disclosed by the antitrust agency in February, 40 billion won was to be allotted to the support center for manufacturers and 25 billion won to the training program.

Another 10 billion won will be invested in giving Apple gadgets to students for disadvantaged backgrounds.
Apple will also offer 10 percent discounts on repair costs to existing iPhone users, which will cost the company 25 billion won.

“Apple prides itself on its long existence in Korea,” said Brandon Yoon, General Manager at Apple Korea.
“The Apple Developer Academy and the R&D center will let Apple share critical information and knowledge with Korean developers, entrepreneurs and students, which will contribute to creating economic value on a national level.”