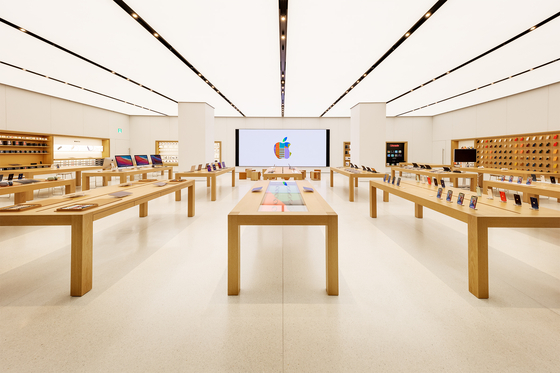 Only visitors that make prior reservations can enter due to Apple’s distancing rules during the coronavirus pandemic. Passersby and customers arriving later than their reserved time will not be allowed in. Apple’s first store in Garosugil in Gangnam, southern Seoul, is applying the same rules.

The company did not say how many people are allowed to share the space at the same time.

The Apple store Yeouido’s opening comes three years after the 2018 opening of the Gangnam branch. According to the IT firm, the first store is one of the “most popular Apple stores” in the world.

“The passion and enthusiasm of our Korean customers is an inspiration to all of us at Apple,” said Deirdre O’Brien, Apple’s Senior Vice President of Retail and People.

“We are honored to continue our expansion in Seoul, having more than doubled the size of our team since opening in Garosugil, and we cannot wait to welcome our first visitors to Apple Yeouido on Saturday.”

On Wednesday, the company opened the new branch’s doors to give local media a sneak peek into the venue.

The brick-and-mortar store has the typical Apple-style glass walls that extend from the floor to the ceiling, completely exposing its interior. Unlike the Garosugil branch, which looks like a large cube with high ceilings, the Yeouido store has a less dramatic look to it but is more spacious. 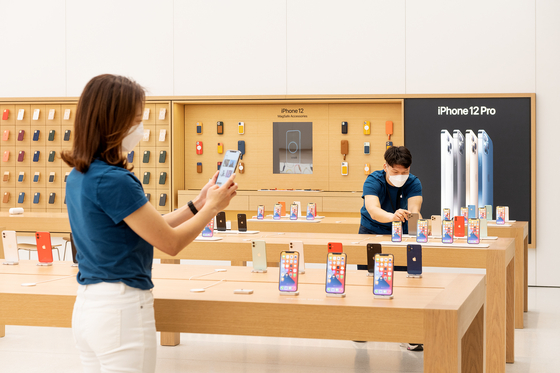 The layout is basically the same in the second store as the first. Apple products are placed on wooden tables in the middle and accessories are on the walls. The second store does not have a board room for business meetings, which is on the Garosugil branch’s basement floor.

Genius Bars, where customers can consult with staff on products or request service, are located at the ends of the room. A total of 117 employees will be running the Yeouido store. Apple Korea said that more than doubles the number of employees dedicated to customer service. The branch’s staff can offer services in six languages, Korean, English, Japanese, Chinese, Spanish and Indonesian.

At the center of the wall facing the entrance is a video wall with the Yeouido store’s customized Apple logo. Korean illustrator Yoony Suk was the designer of the work, Apple said, which was inspired by the finance district’s skyscrapers and vibrant atmosphere.
.

A small area of chairs right in front of this screen is the “Forum,” where Apple will hold informative sessions on ways to use its devices, by reservation only. The Yeouido branch will start offering them upon opening, though they are suspended at the Garosugil branch.

Apple’s third store is currently under construction in Myeongdong, central Seoul, and with opening set for August, according to local reports.