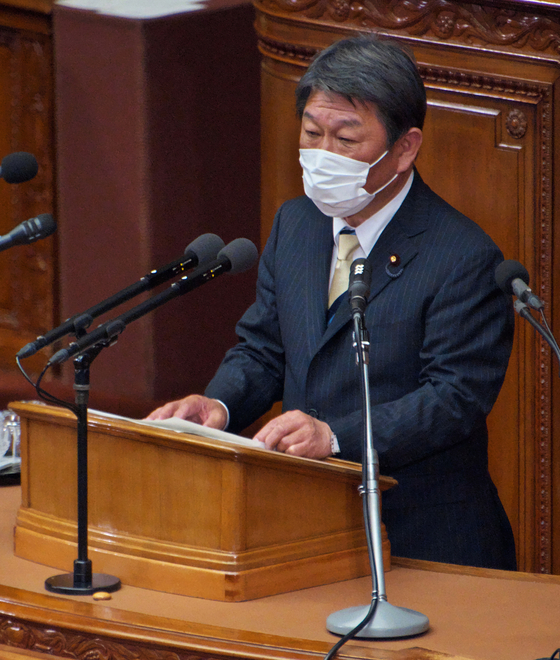 The statement was made during Motegi’s meeting with the press, according to Reuters, when he called the Korean ruling “extremely regrettable.”

“Liquidating [the assets] would invite a grave situation for both Japan and South Korea,” he said, according to Kyodo News and other local media outlets in Japan.

The Daejeon District Court on Monday ordered the sale of Mitsubishi Heavy Industries' two copyrights and two patents to compensate the plaintiffs — a group of survivors of Japanese wartime forced labor including Yang Geum-deok and Kim Sung-ju.

Each victim is estimated to be paid around 209 million won ($176,500), but the process is still up in the air because Mitsubishi said it will appeal the decision immediately.

It was the first time that a Korean court ordered the liquidation of Japanese corporate assets in a damages suit filed by the survivors of forced labor. The suit was filed after Mitsubishi refused to apologize or compensate the victims despite a landmark 2018 Korean top court decision siding with the forced labor victims.

On Oct. 30, 2018, the Korean Supreme Court ordered Japan's Nippon Steel & Sumitomo Metal to compensate victims of forced labor during World War II. Around 500,000 Koreans are estimated to have been subjected to forced labor in Japan at the time, when Korea was under Japanese occupation (1910-45).

The Supreme Court made a similar ruling the next month on Nov. 29, 2018, ordering Mitsubishi Heavy Industries to compensate a separate group of victims 80 million to 150 million won each.

Korea’s top court acknowledged the illegality of Japan’s 1910-45 colonial rule and recognized that individuals' rights to compensation had not expired.

Both Nippon Steel and Mitsubishi have refused to comply with the Korean top court's decisions, forcing the victims into a drawn out legal process to seize the Japanese companies’ assets in Korea.

There are several ongoing cases.

The case at Daejeon District Court dates back to 2019, when the court ordered the seizure of bonds owned by Mitsubishi in Korea to compensate the victims. Mitsubishi appealed, which was dismissed by the supreme court.

The Daejeon court’s decision on Monday was the follow-up, ordering liquidation of the bonds seized.

A victim and the relatives of three other deceased victims had also filed a damages suit to Suwon District Court, which in August ordered the seizure of bonds owned by Mitsubishi in LS Mtron, a Korean industrial machinery manufacturer, worth about 850 million won. Mitsubishi appealed immediately, but the appeal was dismissed by the Supreme Court.

Another damages suit is currently pending at Daegu District Court, in which the survivors of forced labor, including Lee Chun-sik, have filed for compensations. The court in early 2019 ordered the seizing of 194,749 shares of PNR, a rotary hearth furnace technology joint venture by Nippon Steel and Korean steelmaker Posco, worth about 974 million won. The court in May appraised PNR, a preliminary measure to sell off the assets of the Japanese steel company to compensate the victims.

“It is not based on facts,” said Korea’s Foreign Ministry spokesman Choi Young-sam in a press briefing Tuesday, addressing Minister Motegi’s claim that the ruling was a violation of the international law. “The Korean government expects that consultations between Korea and Japan can be carried out as soon as possible to come up with a solution that all parties can agree on, taking into account the realization of victims' rights and Korea-Japan relations.”