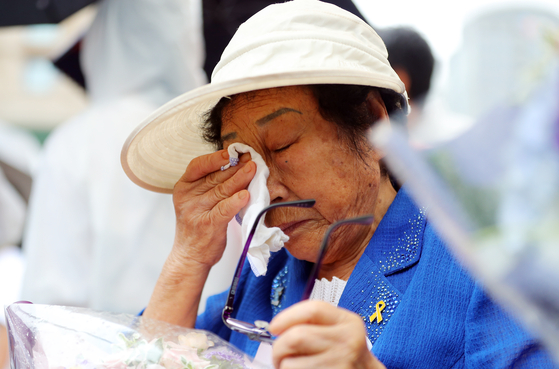 Yang Geum-deok, in her 90s, is one of the few remaining survivors of the Koreans exploited as forced laborers during Japan's annexation of Korea, especially before and during World War II. The file photo shows Yang wiping her tears at a public rally to call for Japan's compensation of the forced labor victims on Aug. 15, 2019, Korea's Independence Day. [NEWS1]


The court on Dec. 27 dismissed an appeal Mitsubishi Heavy Industries filed, after a local court ordered the seizure of two patent rights of Mitsubishi in order to compensate forced labor victim Park Hae-ok, according to legal sources.

Park’s case is one of several ongoing in courts in Korea.

Around 300 Japanese firms including Mitsubishi Heavy Industries, Nissan, Toyota Motors, Nikon Corporation and Toshiba Corporation exploited an estimated 7.82 million Koreans, using them for forced labor between 1931 and 1945, according Korea’s prime minster-led research in 2015.


Many of the victims have since passed away, with most of the few survivors in their late 80s or 90s.

The Korean Supreme Court made a landmark ruling on Oct. 30, 2018, ordering Nippon Steel & Sumitomo Metal, renamed Nippon Steel, to pay 100 million won each to Korean victims of Japanese forced labor during World War II. It made a similar ruling on Nov. 29, 2018, against Mitsubishi Heavy Industries.


Korea’s top court acknowledged the illegality of Japan’s 1910-45 colonial rule and recognized that the individuals' rights to compensation had not expired.

Japan has strongly protested the decisions, claiming that all compensation issues related to its colonial rule were resolved through a 1965 treaty normalizing bilateral relations.

Both Nippon Steel and Mitsubishi refused to comply with the Korean top court's decisions, leading to a drawn-out legal process enabling the liquidation process of the companies’ assets in Korea to begin, a move that escalated tensions between Seoul and Tokyo.

The forced labor victims then filed a request on March 7, 2019, to seize and sell six patents and two trademarks held in Korea by Mitsubishi with the Daejeon District Court, which specializes in patents and trademark issues. The request entails two trademarks in victim Yang Geum-deok’s case, and six patents in the cases of victims Lee Dong-ryeon, Park Hae-ok and Kim Sung-ju.

The Japanese company filed an appeal with the Daejeon District Court in December 2020 against a seizure order for four of the patent rights, involving Park’s and Lee’s cases.

After a similar back-and-forth between Mitsubishi and Korean courts, the latest Supreme Court ruling on Park’s case means the Daejeon court can now order the liquidation of the two patents to compensate her.

Mitsubishi’s appeal to the Daejeon court on Lee’s case is still being reviewed.

There are currently two other forced labor victims’ compensation cases ongoing at other courts.

One victim and the relatives of three other deceased victims had also filed a damages suit to Suwon District Court, which in August 2021 ordered the seizure of bonds owned by Mitsubishi in LS Mtron, a Korean industrial machinery manufacturer, worth about 850 million won. Mitsubishi appealed immediately, but the appeal was dismissed by the Supreme Court.

Another damages suit is currently pending at Daegu District Court, in which survivors of forced labor, including Lee Chun-sik, have filed for compensations. The court in early 2019 ordered the seizing of 194,749 shares, worth about 974 million won, of PNR, a rotary hearth furnace technology joint venture by Nippon Steel and Korean steelmaker Posco. The court in May 2021 appraised PNR, a preliminary measure to sell off the assets of the Japanese steel company to compensate the victims. In December 2021, the court ordered the selling of the shares.