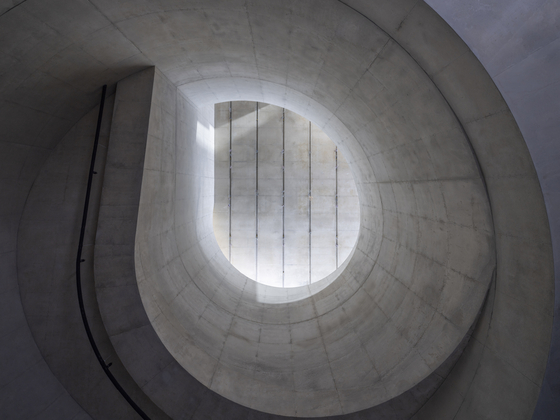 ″Structure Studies: Topology #5395″ by Korean artist Jung Ji-hyun, which captures the opening of the ceiling of the exhibition space on floor B2 in the new SongEun museum building. [SONGEUN] 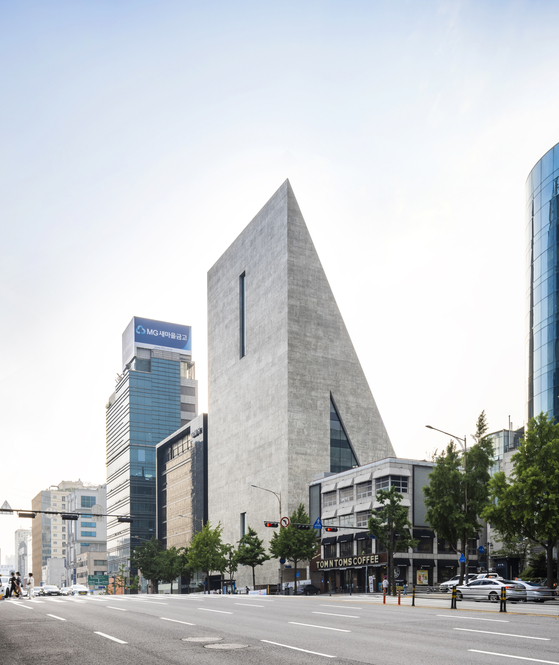 
Renowned Swiss architect duo Herzog & de Meuron’s first-ever Korean project — a new museum building for the SongEun Art and Cultural Foundation in Gangnam, southern Seoul, opened on Wednesday. The monolithic and minimalist concrete building, in a triangular shape, features a tall front facade facing the main street and a sloping back side facing the garden.

“When I pass by car, the building has a special expression,” said Pierre de Meuron of the duo during a press conference in Seoul on Tuesday. He emphasized the presence of the building as a non-commercial art space within Cheongdam-dong, one of the most commercial areas of Seoul.

“It is not the largest or highest but it has an aura — it expresses something different from the [neighboring] office buildings or shopping malls. This has a concentration. [You feel] much energy concentrated into the building. The building gives off this quality [...] this density.

“On the other hand, when you are in the building, first of all it’s for perceiving art, for interaction between art and people,” he continued. “That’s the most important. That’s why I as an architect step back. It’s very annoying and disturbing when the architecture is too loud.”

Four of the building’s 11 stories aboveground and two of its five floors underground are used for SongEun museum. The floor areas are not very wide; the main exhibition spaces are Floors 2, 3 and B2 and their area are respectively 556, 572 and 820 square meters (5984.7, 6156.9 and 8826.4 square feet). However, there are relatively spacious rooms for exhibitions along with smart small spaces such as a staircase used at the same time as an auditorium for a film or video art.

In particular, the large cave-like space on floor B2 is impressive with a beautiful geometrical form that is part of the ceiling which is open to the floor aboveground and creates the effect of soft light coming through the opening. The space seems fit for exhibitions of media art pieces and sculptures. 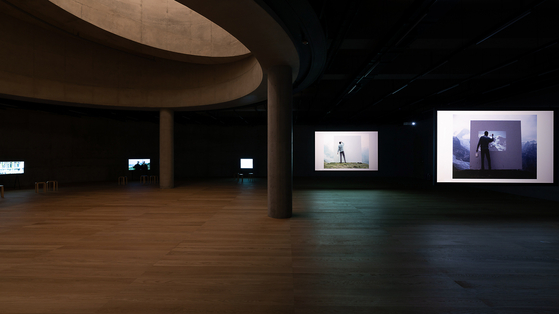 
Now, on view in the space is a two-channel video work “Projection” by Swiss artists Remy Zaugg (1943-2005) and Rene Pulfer as well as videos of conversations between de Meuron, Jacques Herzog, artists and critics, as part of the museum’s inaugural show titled “Herzog & de Meuron. Exploring SongEun Art Space. An Exhibition and Collaboration.”

The architect duo is used to designing exhibition spaces. Among hundreds of projects by Herzog & de Meuron, who won the prestigious Pritzker Architecture Prize in 2001, are many museums around the world including the famous Tate Modern in London, which was transformed from a power plant.

Asked whether they take a different approach when they design a relatively small museum like SongEun, de Meuron said, “Size doesn’t matter. Smaller museums can be even more condensed [...] Small museums can be also beautiful and have great energy condensed in small spaces. This has something to do with the context where this building is located. It’s in Seoul. This city has so many buildings built in such a short time. I understand that in Korea buildings don’t last so long. But as for this building in concrete, as Jacques [Herzog] said [in a video for the press], we hope it will be a building [that lasts] for many generations.”

Regarding the surface of the concrete facade, de Meuron said that it is imprinted with wood grain patterns to express the meaning behind the name SongEun, which is “hidden pine tree.” SongEun was the pen name of Yoo Sung-yeon (1917-1999), the founder of the non-profit foundation and the mining and energy company ST International. 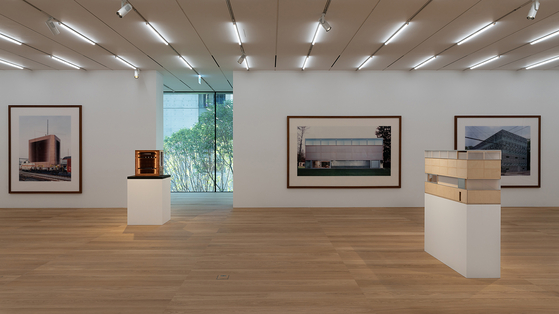 
The foundation’s two galleries SongEun Art Space and SongEun Art Cube, are now combined into this museum under the single name SongEun. The inaugural exhibition features works by 13 teams of artists. Among them are the famous German artist Thomas Ruff’s photos of buildings designed by Herzog & de Meuron around the world juxtaposed with their models and Korean artist Jung Ji-hyun’s photos of this new SongEun building under construction and after completion.

Korean graphic designer duo Sulki and Min, who designed the new corporate identity of SongEun museum, is presenting a media art piece on a column wrapped in a seamless LED screen beside the entrance.

The exhibition runs through Nov. 20. Admission is free. Booking in advance online is required. The booking site is http://naver.me/5cTqlFXf.