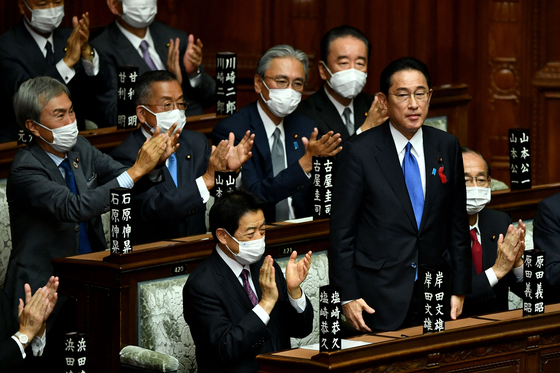 Fumio Kishida, standing, receives applause after he is elected as Japan’s new prime minister at the lower house of the Diet in Tokyo Friday. Korean President Moon Jae-in sent a congratulatory letter to Kishida the same day. [AFP/YONHAP]

Moon said he “looks forward to seeing the two countries communicate and cooperate to share the basic values of democracy and a market economy, setting an example of cooperation as neighboring countries that are closest geographically and culturally,” said presidential spokesperson Park Kyung-mee.

Kishida, a former foreign minister, was elected leader of Japan’s ruling Liberal Democratic Party (LDP) last week and officially confirmed as prime minster following a parliamentary vote Monday. He replaced Yoshihide Suga, who resigned earlier in the day after just one year in office, after facing criticism for Japan’s handling of the Covid-19 pandemic.

The Korean government said that it expects “to gather wisdom to not only resolve the current issues between the two countries but also global issues such as Covid-19 and the climate crisis” with Kishida and his new cabinet.

Park added that the Korean government is “ready to sit face-to-face with Japan's new cabinet for dialogue and communication and strengthen cooperation in a progressive direction in various fields such as economy, culture and people-to-people exchanges for the joint prosperity of the two countries.”

Seoul has been working to improve relations with Tokyo, which have deteriorated over disputes over historical and territorial issues stemming from Japan’s 1910-45 colonial rule over Korea and a trade spat since 2019.

Kishida, known to be a more moderate politician than his immediate predecessors, announced his new cabinet, filled with allies of former Prime Minister Shinzo Abe. He retained current Japanese Foreign Minister Toshimitsu Motegi and Defense Minister Nobuo Kishi, Abe’s younger brother, in an indication of continuity of Tokyo’s diplomatic and security affairs as its seeks to work with Washington amid rising Sino-U.S. tensions in the region.

Kishida served as foreign minister under the Abe administration at the time of the signing of the so-called comfort women deal in December 2015, meant to resolve the issue of Japan’s wartime sexual slavery.

The Korean and Japanese foreign ministries under previous administrations struck a deal on Dec. 28, 2015, which included an apology by Tokyo and a 1 billion yen ($9 million) fund for the victims.

The bilateral agreement received backlash from the victims and civic groups at the time because of a lack of transparency, and the Moon administration has said it will not scrap the 2015 deal but underscored that it was not a true resolution to the issue of Japan’s wartime sexual slavery.

Seoul and Tokyo also struggle over the issue of compensation of Korean forced laborers.

Moon on Monday sent a letter to Suga expressing appreciation for his work during his tenure and urged him to continue to make efforts to promote friendly and cooperative relations between the two countries, said the Blue House.