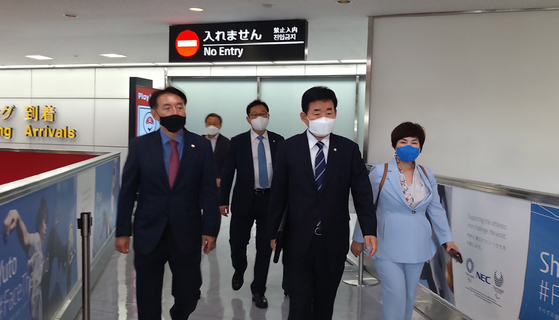 Korean lawmakers from the Korea-Japan Parliamentarians' Association led by Democratic Party Rep. Kim Jin-pyo arrive at Narita Airport in Tokyo Wednesday afternoon for a two-day trip to meet with their Japanese counterparts. [YONHAP]


Korea is holding out to the last-minute for a leaders summit with Japan ahead of the Summer Olympics despite Tokyo remaining unresponsive.

Addressing speculation that President Moon Jae-in will visit Japan to attend the opening ceremony of the Tokyo Olympics on July 23 and hold a bilateral meeting with Japanese Prime Minister Yoshihide Suga, the Blue House said Wednesday that while "nothing has been decided," it hopes a summit will come through for the sake of bilateral relations.

Park Soo-hyun, the Blue House senior secretary for public communication, said in a CBS radio interview Wednesday, "We continue to stand by our position that we hope that a Korea-Japan summit will be held, and that there will be practical results that bring hope to the people of both countries."

He said Korea stands by its two-track approach to relations with Japan, separating historical disputes from areas the two neighbors can work together on.

Addressing the Korean public's lack of enthusiasm for a visit by Moon to Tokyo, he said, "From the perspective of the president who is in charge of state affairs, it is not possible to act only on emotions regarding Japan, our closest neighbor."

With just nine days left until the Olympic opening ceremony, not much time remains to arrange what would be the first formal meeting between Moon and Suga.

When asked in the radio interview if Moon would take part in the Olympic opening ceremony if there is no summit guaranteed to yield sufficient results, Park replied that "nothing is definitive," while calling on Japan for a "change in attitude."

Park was critical of the Japanese government recently leaking to the media comments about a possible summit, saying it has "caused confusion for our people."

Japanese media in recent weeks has been reporting that the Japanese government wanted a short 15-minute meeting between Moon and Suga, generally citing government sources.

The Korean Foreign Ministry Sunday expressed "strong regret" over such leaks about a possible summit, noting the consultation process could be hindered unless Tokyo "responds prudently." It added that Japanese media speculation was "not true."

Japan so far hasn't been responsive to Korea's desire for substantive talks that could tackle some pending issues between the countries.

They include the issue of wartime sexual slavery and forced labor victims, Japan's export restrictions on Korea and Tokyo's planned discharge of contaminated water from the Fukushima power plant into the Pacific Ocean.

The two sides have also clashed over territorial claims over Korea's Dokdo islets in the East Sea.

Park did not elaborate on what could constitute a significant achievement from a Moon-Suga summit, saying, "I can't comment in further detail."

Japan's conservative Sankei Shimbun reported in an editorial Wednesday that a bilateral summit would be "meaningless" unless Moon addresses his "anti-Japanese attitude," adding that there is "no need for a full-fledged meeting" unless Korea provides a "concrete plan" to resolve differences.

Korean lawmakers from the Korea-Japan Parliamentarians' Association kicked off a two-day trip to Tokyo Wednesday. The delegation, led by ruling Democratic Party Rep. Kim Jin-pyo, will meet with their Japanese counterparts to discuss ways to improve Korea-Japan relations. The group last visited Japan in November and met with Suga.