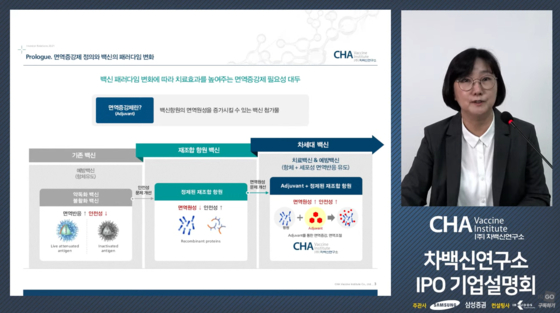 Yum Jung-sun, CEO of CHA Vaccine Institute, speaks about the company’s future goals during an online briefing Tuesday ahead of its initial public offering scheduled for later this month. [CHA VACCINE INSTITUTE]


CHA Vaccine Institute hopes to be the world’s first bio company to release therapeutic vaccine for chronic hepatitis B.

It is just one of the ambitious plans the Korean vaccine maker offered up during an online briefing held Tuesday ahead of its initial public offering (IPO), scheduled for later this month.

In case of chronic hepatitis B, there’s no cure to date. If the country succeeds in commercializing its candidate, CVI-HBV-002, it will be the such vaccine in world. The therapeutic vaccine candidate is currently undergoing Phase 2 clinical trials locally, including at Seoul National University Hospital.

The company also owns two immunity enhancement technologies that can enhance the efficacy of a vaccine: Adjuvant L-pampo and Lipo-pam. L-pampo is an immune stimulating adjuvant technology that enhances the immune system by targeting TLR2 and TLR3 receptors of antigen-presenting cells that play an important role in immune response. Lipo-pam is a delivery technology for particle formulation.

They are about 100 times more effective in forming antibodies than existing technologies, the bio company said. They are also helpful in activating immune cells like T cells to directly attack viruses.

The successful IPO will make CHA Vaccine Institute a company with market capitalization of between 290.7 billion won and 396.4 billion won.

Public subscription will take place on Oct. 12 and 13, and Samsung Securities is the main underwriter for the IPO. Its debut on the Kosdaq market is scheduled for Oct. 22.

“If CHA Vaccine Institute’s reliability and awareness increase through the IPO, we anticipate that we could be in more advantageous position when signing licensing deals with foreign companies,” CEO Yum said. “CHA Vaccine Institute will grow as a global company that develops vaccines and treatments for not only infectious diseases but also various diseases such as chronic illness and cancer.”