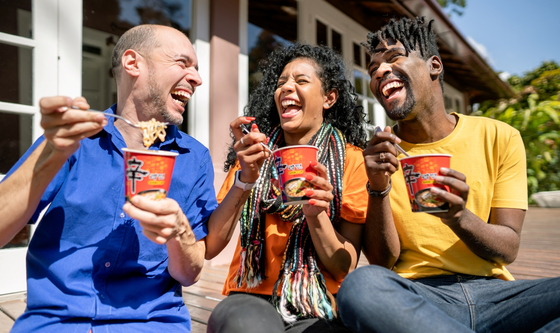 
Nongshim sells more of its iconic Shin Ramyun overseas than it does in the home market.

The company announced Tuesday that third-quarter overseas sales of the product totaled 370 billion won ($311.9 million). That’s 53.6 percent of the total sales of Shin Ramyun, beating sales in Korea for the first time.

Nongshim expects Shin Ramyun sales to total 930 billion won this year, up 8 percent on year. The company said that it aims to achieve 1 trillion won of ramyeon sales next year.

According to the company, sales of its ramyeon rose in part due to the appearance of two of its products in “Parasite,” the Oscar-winning film.

The pandemic also helped, with many people scrambling to stock their shelves with ramyeon.

Shin Ramyun was first exported globally in 1987, and it is sold in over 100 countries. Of all the overseas markets, the company had the highest sales in China. There, its third-quarter sales were 218.3 billion won up 28.2 percent on year. Sales of Nongshim America totaled 250.2 billion won, up 26.5 percent.

The company plans to expand production and increase supply to the United States, Canada, Mexico and South American.


Samyang Foods is strengthening its presence in the Chinese market. The company announced Tuesday it will establish a subsidiary in Shanghai by the end of the year.

The company will develop new products fit to tastes of Chinese consumers and increase the number of stores carrying Samyang Foods products.

The company in August established Samyang America in Los Angeles with an online store on Amazon.

Product placements may also have helped. Characters in "Squid Game" were seen munching on uncooked Samyang Ramen from Samyang Foods while drinking soju.

“We are aiming to improve profitability by efficiently managing distribution channels and costs,” said a spokesperson for Samyang Foods. “We plan to make total sales of overseas branches in Japan, United States and China be responsible for 70 percent of our foreign sales.”