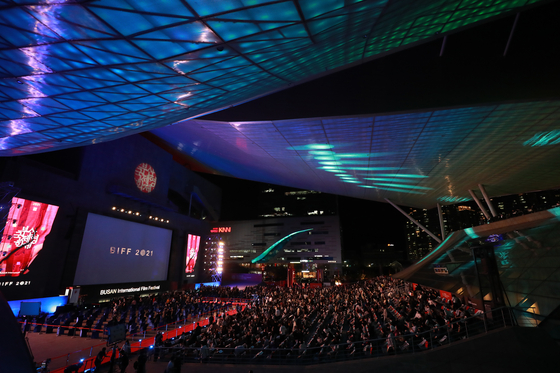 The 26th Busan International Film Festival opened on Wednesday with pandemic protocols in place to protect the guests, organizers and participants. [YONHAP]


BUSAN — The 26th Busan International Film Festival (BIFF) opened with a red carpet, which is significant as it’s the first time in two years that such a Hollywood-style kickoff was allowed.

In 2020, the event was pushed online due to the pandemic. This year, the organizers are working to bring the festival back to the physical world while at the same time strictly following all the necessary protocols to keep attendees save.

“Although we’ve faced numerous difficulties while preparing for the festival this year due to our budget and preventive measures we needed to take due to Covid-19, this year’s opening ceremony for BIFF will be the first proper international event hosted since we entered the pandemic era,” festival director Huh Moon-young said at an online press event last month.

For the opening ceremony, which took place on Wednesday night, the audience, festival staff, press and guests were admitted after showing proof, in paper form or with an app, that they are Covid negative or fully vaccinated

Director Im Sang-soo’s “Heaven: To the Land of Happiness” was the first film screened at the festival and marked the beginning of the 10-day event. Director Lok Man Leung’s “Anita” will close the festival.

A total of 223 films from 70 countries have been invited to this year’s festival, which run through Oct. 15. With exception of several short films, all of the invited feature films are scheduled to be screened two to three times each on 29 screens in six theaters. There will be no online screenings. Last year, the invited films were each screened only once.

For film screenings, only 50 percent of the seats are available for reservation, while audiences are required to wear masks in theaters and at all film events.

Directors Ryusuke Hamaguchi and Leos Carax are visiting Busan for their invited films, which will premiere during the gala presentation section. Hamaguchi’s “Wheel of Fortune and Fantasy,” which won the Silver Bear Grand Jury prize at this year’s Berlin International Film Festival, and “Drive My Car,” which won the Best Screenplay at Cannes, have both been selected for this section. Carax’s “Annette” won the Best Director this year at Cannes.

The directors are scheduled to host panel discussions after the screenings.

More information about the festival is available at www.biff.kr.