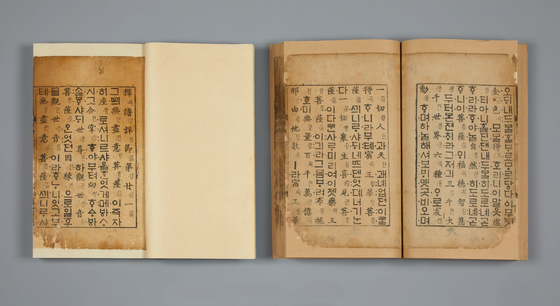 Volumes 20, left, and 21 of ″Seokbosangjeol″ on display at the National Museum of Korea to mark this year's Hangul Day on Oct. 9. The manuscripts are part of former chairman of Samsung Group Lee Kun-hee's collection donated to the museum. [NATIONAL MUSEUM OF KOREA]


The Joseon Dynasty (1392-1910) was a strong Confucian kingdom. The Confucian scholar-officials severely persecuted other religions such as Buddhism and Catholicism. In such a period, Queen Soheon (1395-1446), who was King Sejong’s queen until her death in 1446, was a devoted believer in Buddhism.

After getting married to Prince Chungyeong — King Taejong’s son who later becomes King Sejong (1392-1450) — at age 13, she became a princess. But as soon as she became the queen, King Taejong, the third king of Joseon, who feared the growing influence of Queen Soheon's family, had her father and two of her uncles killed while demoting the rest of the family and relatives to the lower slave class.

The queen’s position was also threatened, but she was saved because she had already given birth to two sons, who could have become rulers. But even more devastating for the queen was that she had to see three of her 10 children die before her.

Perhaps her religious beliefs were what kept her sane despite having to experience such hardships.

King Sejong, the revered king who created the Korean alphabet system known as hangul during the final eight years of his life, decided to honor his devout Buddhist wife after her death by ordering his son Prince Suyang to create “Seokbosangjeol,” a compilation of manuscripts about Buddha’s life and his teachings in hangul.

Hoping it could ease his mother’s passage to the next life, Prince Suyang, who later becomes King Sejo, the seventh king of Joseon, created “Seokbosangjeol” in 1447, which became Korea’s first Buddhist text written in hangul.

To mark this year’s Hangul Day on Oct. 9, the National Museum of Korea has decided to exhibit Volumes 20 and 21 of “Seokbosangjeol,” which is a part of the collection donated by the late former chairman of Samsung Group Lee Kun-hee (1942-2020). 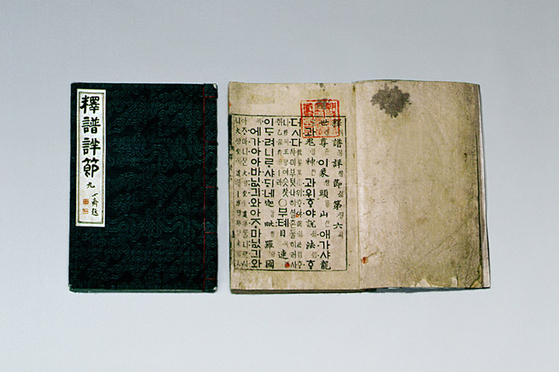 Volumes 6, 9, 13 and 19 of “Seokbosangjeol” are in the Library of Korea’s collection in southern Seoul. [CULTURAL HERITAGE ADMINISTRATION] 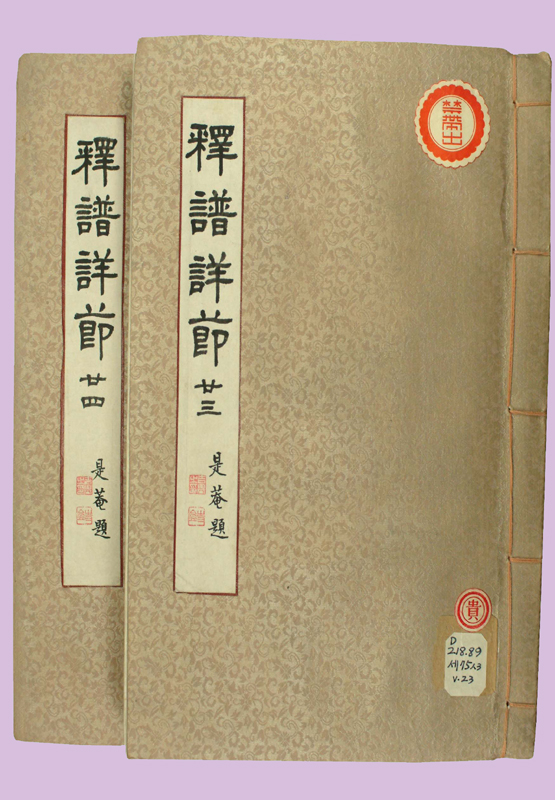 Volumes 23 and 24 of ″Seokbosangjeol″ are in the collection of Dongguk University’s Central Library in central Seoul. [CULTURAL HERITAGE ADMINISTRATION]

A total of 24 volumes are believed to have been published, however, many of them are lost. Currently, Volumes 6, 9, 13 and 19 of “Seokbosangjeol” are in the Library of Korea’s collection in southern Seoul, while Volumes 23 and 24 are at Dongguk University’s Central Library in central Seoul.

Volumes 20 and 21 have never been revealed to the public before, according to the museum. The museum said there was a display of “Seokbosangjeol” at the exhibition displaying some of the collection donated by former Samsung Group Chairman Lee to the museum, which ended on Sept. 26, but they were reprinted versions made using woodblocks, not the original edition made using metal type.

The 152 metal types believed to be the Gapinja type from the 15th century are also on display for the first time. The metal movable type blocks are not the ones that were unexpectedly discovered in June inside a pot during an excavation project in the west of Tapgol Park in Jongno District, central Seoul. These have been in the museum’s storage after being purchased in 1931 by the Museum of Japanese Government General of Korea from a Japanese collector. (The Museum of Japanese Government General of Korea later became the National Museum of Korea after Korea’s liberation from Japan.)

According to the museum, studies on the museum’s “somewhat different-looking metal type blocks that may be Gapinja type” had been put on hold as there were no other similar types that had been discovered to compare them to. But since the discovery of about 1,600 pieces of metal movable type in June, which included some that look similar to the ones at the National Museum of Korea, researchers quickly began studying the metal types in earnest. Though they are yet to conclude any definitive answers as the research is ongoing, many experts are positive that they are both Gapinja type. 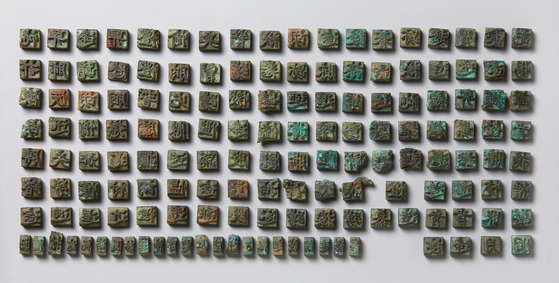 
“We were able to compare the components of the metal type found recently and the ones we had, and both are from the same period,” said Kim Dong-woo, a researcher from the National Museum of Korea. “We also checked the font and the size with the book printed using Gapinja type, which was also donated by former Chairman Lee Kun-hee. Many of the characters were the same.”

Gapinja type is the metal movable type blocks in Chinese characters presumed to be created in 1434 during King Sejong’s reign. Gapinja type is considered highly significant as it is said to be the type that had the most perfect form, according to Lee Seung-cheol, a researcher at the Unesco International Centers for Documentary Heritage.

“It is an important relic that showcases the development of Korea’s movable metal type casting technology that continued to develop since ‘Jikji Simche Yojeol’ (1377), the book historians believe to be the first known use of movable metal type,” said Lee.

“In addition to the research value of hangul, ‘Seokbosangjeol’ is also highly valued for the study of the culture of Buddhism,” said Kim from the museum. “Although the Joseon Dynasty is often known as a Confucian country, the tradition of Goryeo [918-1392] remained in the royal family and Buddhist culture continued and ‘Seokbosangjeol’ proves this. There were many people who followed Buddhism in the royal family in the early Joseon Dynasty.”

According to the museum, the metal type blocks have been exhibited at the Cheongju National Museum in the past, but it’s the first time for them to be exhibited as “Gapinja-presumed metal type.”

Jang Jin-won, a research professor at Dongguk University’s Institute for World Buddhist Studies, also said “Seokbosangjeol” is also significant in that “it’s the first book that was created after the creation of hangul to check whether it was made correctly or if there were any errors.”

“Buddha’s sermons are also included, which is different from existing literature on Buddhism,” he added. “It also attests that the royal court during that time depended heavily on the Buddhist community.”

The exhibit kicked off on Sept. 30 and will be ongoing permanently at the museum's permanent exhibition hall on the first floor.