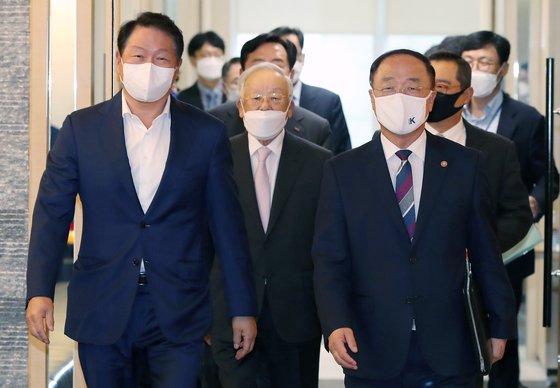 Chey Tae-won, chairman of the Korea Chamber of Commerce and Industry (KCCI), left, enters a conference room at the KCCI in central Seoul with Finance Minister Hong Nam Ki on Oct. 8. [YONHAP]


One of Korea’s most influential business lobbying associations offered its policy recommendations ahead of a presidential election next year as industries push for a reopening of the economy and a transition to clean energy.

Describing the current state of the country as “neither satisfying nor bright,” the Korea Chamber of Commerce and Industry (KCCI) listed dozens of policies, hoping that presidential candidates will take them into consideration for their campaign platforms.

The proposals were sent to the main opposition People Power Party, the ruling Democratic Party, the left-leaning Justice Party and other minor parties.

It called on the government to designate more areas as “clean zones” in which vaccinated people can enjoy relaxed social-distancing measures.

Presently, fully-vaccinated persons are allowed to gather in greater numbers at restaurants and cafes in some regions, but the exemption is not applied to sports facilities and cramped entertaining places like Internet cafes and noraebang (singing rooms).

Another important policy realm involves efforts to cut carbon emissions. The KCCI suggested that the government set up a top governing body tasked with creating and coordinating policies about carbon neutrality.

To accelerate the spread of cleaner energy, it also asked the incoming administration to exempt policies aimed at boosting hydrogen creation from parliamentary feasibility studies and put them on a faster track for swift passage.

The proposal also advocated the use of nuclear power as an energy source, given that nuclear reactors do not produce direct carbon dioxide emissions.

The Moon Jae-in administration has put Korea on a path of reducing nuclear power use.

The KCCI also recommended more generous incentives for couples to have children to stave off the negative impact of a shrinking population on the economy.

For international trade policies, it suggested that Korea join the Comprehensive and Progressive Agreement for Trans-Pacific Partnership (Cptpp) to have its voice heard on the international stage.

The Moon government recently expressed an interest in the agreement, although no decision has been made to join it.

The next administration should work towards improving relations with Japan, it said, given that the neighboring country holds competitiveness in various sectors such as hydrogen fuel cell technology.

“[Presidential candidates] should prioritize the future before the past and focus on the international economy and ways to achieve steady economic growth instead of wrangling over local issues”, said KCCI Executive Vice Chairman Woo Tae-hee.