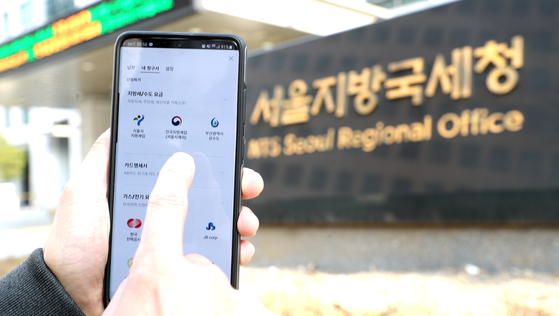 Tax paid via mobile in front of the National Tax Service's Seoul office. The government continues to see increase in taxes this year thanks to economic recovery and rising asset value including real estate. [YONHAP]

According to the Finance Ministry on Tuesday, it collected 240.2 trillion won ($200 billion) in taxes between January and August, 53.3 trillion won or 29 percent more than a year earlier.

When the government submitted its budget proposal for this year to the National Assembly in 2020, it estimated 282.7 trillion won in tax collections for 2021.

The 53.3 trillion won additional taxes in the first eight months of this year is larger than the estimate made a few months ago by the government. It said the total amount of taxes it would collect would be about 314.3 trillion won, 31.5 trillion won more than in 2020.

“While we will have to see at the end of the year, we expect the additional taxes to exceed [the earlier projection’s] 31.5  trillion won,” Hong said.

As in previous months, the biggest contributor has been a recovery of the economy. especially record-breaking exports.

Income taxes, the largest item accounting for 33 percent of the whole, amounted to 79.2 trillion won between January and August, which was 20.8 trillion won or 36 percent more than a year earlier.

When including income generated from funds including the national pension fund, total government income between January and August amounted to 248.2 trillion won, a 55.7 trillion won or 29 percent increase from a year earlier.

Total government spending in the first eight months of this year amounted to 427.3 trillion won, 38.6 trillion won or 10 percent more than a year earlier.

The government suffered a fiscal deficit of 29.8 trillion won, down 58 percent from 70.9 trillion won a year ago.

Spending is expected to continue to grow in the next few months.

In late July, the National Assembly approved this year’s second supplementary budget of 34.9 trillion won, which was 1.9 trillion won more than proposed by the government.

This included 250,000-won emergency relief grant for most Koreans except in the top 12 percent income class.

Applications for the grants started in September.

As of Oct. 6, 42.2 million people had applied, translating into grants of 10.6 trillion won, which was 96 percent of the government budget.

At the beginning of this month, the government started accepting applications for a cash-back program to stimulate credit and debit card spending, which is available to everyone regardless of income or wealth and also open to foreigners.

Over 11.43 million people have applied including 110,000 foreigners as of Saturday.

The government allocated around 9 billion won for the cash-back program.

Also starting Oct. 27 small businesses will be compensated for 80 percent of losses in revenues as a result of social distancing measures.

While the compensation will only be limited to businesses losses generated between July and September, people who are eligible can get up to 100 million won.

The government budget for the compensation program is 1 trillion won.

While tax collections continue to grow, the central government’s debt grows as well.

Central government debt, which exceeded 900 trillion won for the first time in July, grew to 927.2 trillion won in August.