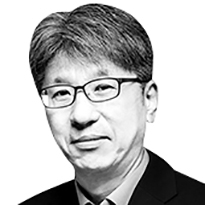 Shin Yong-ho
Theauthor is political director of the JoongAng Ilbo.


Rhyu Si-min, head of the Roh Moo-hyun Foundation, was a forgotten man for a while, but he has returned to the political arena. In a YouTube broadcast he aired with former Unification Ministers Jeong Se-hyun and Lee Jong-seok on Oct. 4, Rhyu announced his last “official event” as head of the foundation.

Rhyu made the announcement just a few days before Gyeonggi Gov. Lee Jae-myung clinched the presidential candidacy of the ruling Democratic Party (DP). “We expect Rhyu’s support for Lee, and I was told he’s preparing to announce it,” said Rep. An Min-suk, a key member of the Lee’s presidential campaign on Friday.

Over the weekend, many increasingly wondered what Rhyu’s role will be in the DP’s presidential campaign. Another politician connected to the Roh Moo-hyun and Moon Jae-in factions said, “Rhyu will likely help Lee.” But it seems unclear exactly what role Rhyu will play. If he will help Lee, he will likely stay outside Lee’s official campaign and support Lee.


Why would Rhyu decide to play a role at this sensitive moment? Expectations for Rhyu’s political debut from Lee’s campaign reflects the DP’s sense of crisis. The party is desperate to put all possible efforts into extending its governance. Does the DP really want to recruit someone retired from politics to support the campaign as long as it can be of any help?

Although Gov. Lee is trying to get over the massive land development scandal in Daejang-dong, Seongnam city when he was mayor, concerns are growing inside the DP. Many feel uneasy about the possibility of more explosive allegations that could destroy the party’s presidential campaign.
The DP has a strong abhorrence of former Prosecutor General Yoon Seok-youl, a top candidate of the opposition People Power Party (PPP), as seen in its deepening fear that it will face a complete ending of its political life if the PPP wins the election.

“Stopping someone like Yoon from winning the presidency is important for us,” said a two-term DP lawmaker. “There are many worries that we will face unimaginable, horrible things if Yoon wins the election.” Another first-term DP lawmaker joined the chorus. “It will be a disaster if Yoon wins,” he said.

Rhyu could be a possible alternative. Gov. Lee was deeply wounded after the primary. Among many DP supporters who are not inclined to him, Rhyu can be an option as he is still a symbol of the pro-Roh and pro-Moon factions. It is inappropriate for former DP Chairman Lee Hae-chan, the leader of the group, to run, and former South Gyeongsang Gov. Kim Kyung-soo, the heir of the Roh-Moon faction, is in prison. Some observers said Rhyu, who was once considered a possible presidential candidate, could be an option to prepare for a possible emergency involving Lee.

If Rhyu actually participates in the presidential campaign, what will happen? Expectations are just expectations. In the past, he used to be known for having an attitude, but he has changed his image as an author with a gentle character through TV shows. Around that time, Rhyu emerged as a possible presidential candidate. But that was only a moment, as his true nature was revealed with the Cho Kuk scandal. At the time, Rhyu appeared to have lost his reason to defend Cho and used unreasonable logic to create a split in the society.

When Cho’s wife was criticized for having removed her computer from her university before the prosecution’s raid over her daughter’s illegitimate admissions to top universities, Rhyu defended her by saying, “She was only trying to protect the evidence.” That was sheer sophistry.
A while later, Rhyu also made public a conspiracy theory by saying he confirmed that the prosecution had looked into the transaction records of the Roh Moo-hyun Foundation’s accounts. One year later, he apologized for the false remarks. As Gov. Lee’s land development scandal can be another Cho Kuk scandal for the DP, Rhyu will not act much differently.

If Rhyu helps Lee, he is practically returning to politics. Though he may say he is not running himself, that does not fit his promise that he will stay away from politics once and for all. When Rhyu apologized for wrongfully accusing the prosecution earlier this year, he promised he would not even comment on politics. As the upcoming presidential election is expected to be a competition of smear campaigns, there is no reason for him to join and add one more critic.

In his previous apology, Rhyu admitted, “I have demonized the opponent.” An election campaign will force him to do the same again. As he has said, he is his own best person when he is a writer.