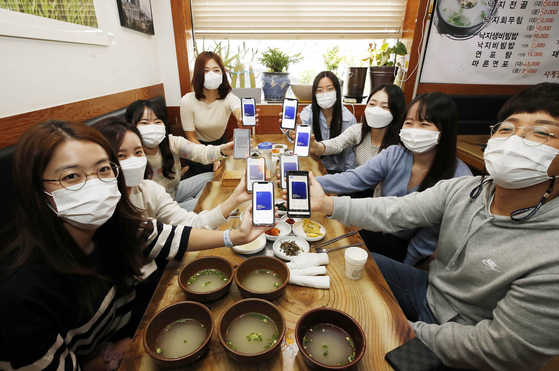 Officials from a public health center in Gwangju produce certificates that show they have been fully vaccinated on their mobile phones on Friday as they have lunch together. Under the slightly eased social distancing guidelines applied from Monday for the next two weeks, the cap for social gatherings after 6 p.m. will be increased from the current six people to a maximum of eight, as long as no more than four in a group are unvaccinated, in the metropolitan area of Seoul, Gyeonggi and Incheon. This includes gatherings at restaurants, cafes and multi-use facilities. A maximum of 10 people, again with no more than four unvaccinated people, will be allowed to meet outside of greater Seoul starting Monday. [YONHAP]