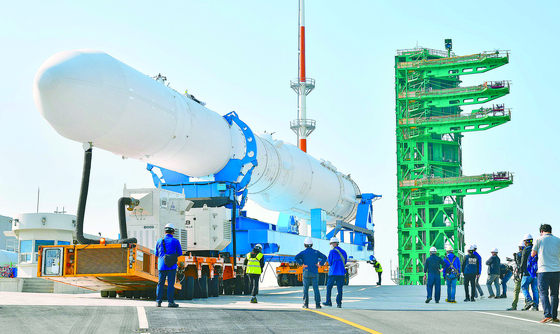 KANG KI-HEON
The author is an industry team reporter of the JoongAng Ilbo.


In 1974 at Hadar Valley in Ethiopia, “Lucy in the Sky with Diamonds” by the Beatles was playing on a cassette player. Anthropologist Donald Johanson named fossilized bones of the first upright woman ever to be discovered “Lucy.” She, who walked upright 3.18 million years ago, is classified as Australopithecus afarensis, the ancestor of modern humans. The bone structure of Lucy was between that of chimpanzees and humans. Scientists who analyzed the fossil concluded that Lucy had climbed trees to live.

On Oct. 16, another Lucy left Earth. NASA loaded asteroid probe “Lucy” on the Atlas V rocket. Lucy unfolded two solar panels that are more than 7 meters (23 feet) wide and is charging the battery.

Lucy will explore Trojan asteroids revolving around the Sun on Jupiter’s orbit. More than 7,000 asteroids are in Jupiter’s orbit, and it is the first exploration ever. Lucy will visit asteroids including Patroculus, whose diameter is 100 kilometers (62 miles), and Donaldjohanson with a 4 kilometer diameter. Lucy will fly by asteroids at the speed of 6 to 9 kilometers per second and use various devices to measure shapes, structures, geological compositions and temperatures.

As per tradition, NASA attached a metal plate of quotes from humans on Lucy. The plate includes quotes from Albert Einstein and Dr. Martin Luther King Jr. as well as from Paul McCartney and Ringo Starr, members of the Beatles.

Upon completing the mission of exploring the asteroids, Lucy is to travel between the Trojan asteroid group and Earth’s orbit. The round trip takes six years. Assuming that the solar cells continue to operate, Lucy will travel back and forth between Earth and the asteroids over hundreds of thousands of years.

On the naming of the spacecraft, NASA stated that by studying these fossils of planet formation, “the Lucy mission could reveal as much about the development of the solar system as the Lucy fossil did about human evolution.”

Separately from Lucy, Korean launch vehicle Nuri, developed purely with domestic technologies, will head to the skies on Oct. 21. If the launch succeeds, independent space walking may be as significant as Lucy’s upright walking.

Lucy looks to break the mold