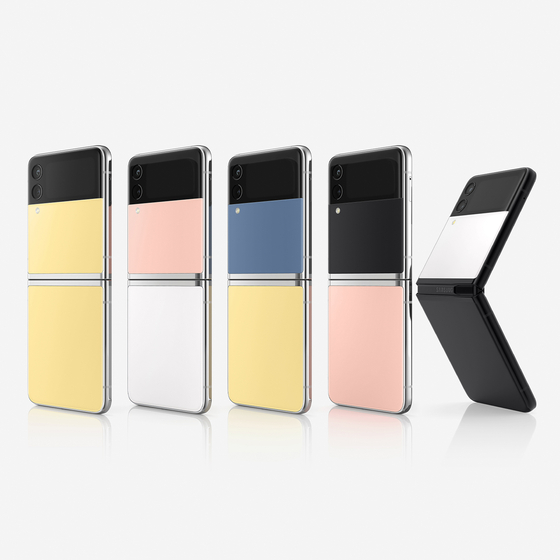 Launched in August, the standard Galaxy Z Flip 3 sold for $999.99 but with only four colors to choose from: lavender, green, black and cream.

The Galaxy Z Flip 3 Bespoke Edition will allow users to choose between two colors for the frame (black and silver), and five for the outside panels (blue, yellow, pink, white and black). The front and back panels can have different colors. That adds up to 49 possible color combinations, the smartphone maker explained, not including all black.

The edition goes on sale today in Korea and six other countries: the United States, UK, Germany, France, Canada and Australia.

Aside from the new colors, all other features remain the same.

This is the first time that Samsung is offering such color combinations for a smartphone. It appears to have learned from its existing Bespoke brand of home appliances, which has appealed to design-conscious customers willing to pay higher prices.

“Today’s customers have diverse tastes and we need to bring the products that fulfill their needs,” said Stephanie Choi, Senior Vice President & Head of Marketing at Samsung Electronics’ mobile communications division.
“Samsung Electronics will continue to develop the technologies that suit customers’ preferences and lifestyles, offering new experiences of expressing themselves though the technology they use,” Choi said.

The Galaxy Z Flip 3 is already one of the best-selling models manufactured by Samsung Electronics.

Its two newest foldable phones – the Z Flip 3 and Z Fold 3 - racked up sales of more than one million only 39 days after their release on Aug. 27, the third fastest passing of the 1 million milestone among Galaxy smartphones.

The Galaxy Z Flip 3 is the star of the duo, with 70 percent of the orders.

Like the Z Flip 3, the Bespoke Edition will feature a dual rear camera with a 12-megapixel primary sensor and a 12-megapixel wide-angle sensor, on top of 10-megapixel front-facing camera.  The external display is 1.9 inches and main display is 6.9 inch.

Interested customers could try the new model at Samsung’s experience stores in Gangnam and the Hongik University neighborhood, western Seoul.