A post for the Galaxy Z Flip 3 is displayed on JD.com, a Chinese e-commerce site. Over 610,000 people are on the waiting list for the phone, which will be available starting on Sept. 1. [SCREEN CAPTURE]


Foldables could turn the tide in China for Samsung Electronics, which has about 1 percent of the smartphone market in that country as it has been caught between Apple on one side and cheap, locally-made devices on the other.

Samsung Electronics will be accepting orders in China from Sept. 1, and the products will go on sale in the country, the world’s largest smartphone market, on Sept. 10.

For about half a decade, Samsung Electronics has been struggling in the Chinese market. According to Shanghai’s Cinno Research, Samsung had 0.5 percent of the Chinese smartphone market in the first half of the year, leaving it in 10th place.

Dongguan, China’s Oppo had 22.7 percent of the market in the first half, Dongguan’s Vivo 19.7 percent and Beijing’s Xiaomi 16.4 percent. Apple was in the fourth place with 14 percent.

“Chinese smartphone companies like Oppo and Xiaomi are more competitive,” said Kim Ji-san, a Kiwoom Securities analyst. “As Chinese people highly prefer TVs and smartphones that are locally produced and buy from local brands, China is a tough market for Korean companies to squeeze into.”

Foldables could be the key to cracking the market again.

“As video content grows in importance with the expansion of 5G network services, the foldable smartphone market will likely be boosted further,” said Park Kang-ho, an analyst at Daishin Securities. “Long waiting lists means that Chinese customer interest in foldable phones is increasing.” 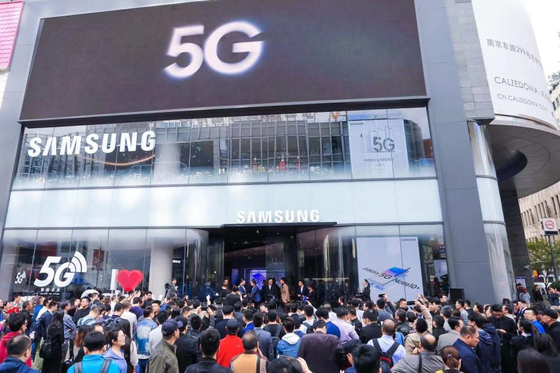 A Samsung Electronics store that was opened in October in Shanghai, China, is crowded with customers. [SAMSUNG ELECTRONICS]


“If foldable smartphones get good feedback after their release in the market, Samsung can anticipate a positive outlook in the Chinese smartphone market next year and in 2023.”

Analyst Kim from Kiwoom Securities warns that declining smartphone sales in China is another issue Samsung Electronics is facing.

“Sales of smartphones in China is declining in recent years, which could have a negative impact," said Kim. “There are many variables in China’s smartphone market, so we can’t predict the future until their official release.”

A total of 75 million smartphones were sold in the second quarter in China, down 6 percent on year, according to market tracker Counterpoint Research. Compared to the previous quarter, it’s down 13 percent.

Samsung Electronics introduced the new models on Aug. 11 promising that they will be more durable and affordable than previous foldables, which did poorly in the market and did not revolutionize the smartphone business as had been hoped. The Z Fold 3 starts at $1,799.99 compared to the Fold 2’s $1,999.99. Orders are being taken in about 70 countries worldwide.

At home, about 270,000 units were activated on Aug. 24 alone, the first day they could be activated for customers who made orders. Around 1 million units have been sold since Aug. 17.

To cover the anticipated demand, Samsung Electronics plans to expand production facilities at its plant in Bac Ninh, Vietnam.

“At this pace, the number of foldable orders could break 7 million, the market expectation for the series,” Kim added.