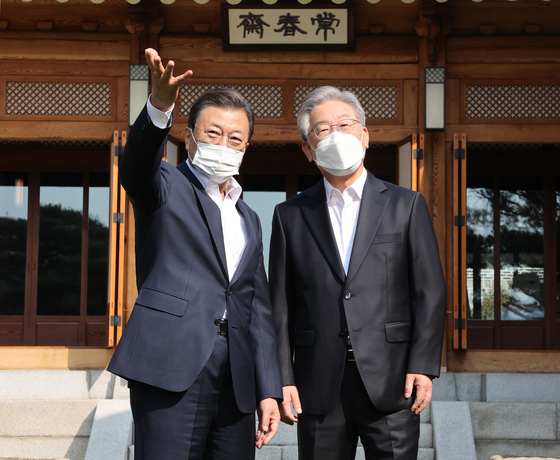 President Moon Jae-in, left, and Lee Jae-myung, the presidential candidate for the ruling Democratic Party (DP), take a commemorative photo ahead of their 50-minute tea meeting at the Blue House in central Seoul on Tuesday. [YONHAP]


President Moon Jae-in held one-on-one talks with Lee Jae-myung, the presidential candidate of the ruling Democratic Party (DP), Tuesday, urging the former Gyeonggi governor to develop “many good policies,” a piece of advice he shares with other contenders as well.

Moon congratulated Lee on his election as the DP presidential candidate at the beginning of their 50-minute tea meeting at 11 a.m. at the Blue House in central Seoul, accompanied by just one aide — Lee Cheol-hee, the senior presidential secretary for political affairs.

The meeting came 16 days after Lee secured his party's nomination by winning a narrow majority of votes in the DP primary race on Oct. 10, beating out Lee Nak-yon, Moon’s former prime minister.

Moon told him, “If you compete with other candidates in good faith with such policies, the process itself will greatly help the country's development, and the completed policy becomes one blueprint for leading the next government,” adding he would also “offer the same request to the other candidates.”

Lee told Moon in remarks open to the press, “As the Gyeonggi governor, I was also a member of the Moon Jae-in government,” stressing his alignment to many of the president’s policies and saying he would do his best for the success of the current administration.

Moon, whose five-year term comes to an end in May next year, asked Lee to “help [him] out till the end.”

The two sides steered clear of political issues related to the election, sticking to uncontroversial topics like combatting climate change and the economy.

Referring to Moon’s parliamentary budget address Monday, which focused in large on economic recovery and a return to normalcy following the Covid-19 pandemic, Lee said he could “relate” to everything the president said.

Lee noted that like Moon, he respected former U.S. President Franklin Roosevelt and pointed out that U.S. President Joe Biden’s administration also appears to be inspired by Roosevelt.

“I agreed very much that in a new era of transition, you have to invest in future-oriented industrial restructuring, large-scale state intervention and creating a future industry,” Lee said.

Likewise, he stressed the importance of responding to the climate crisis and said, “We have to actually take the lead in responding to climate change, because there is no opportunity if we just follow.”

Moon replied that he will be attending the G-20 summit in Italy and the United Nations Climate Change Conference, COP26, in Glasgow, Scotland, in the coming days.

The president explained Korea has planned a scenario for carbon neutrality by 2050 and also raised its nationally determined contribution (NDC) targets for 2030. Moon said that some other countries have presented higher targets up to 60 percent, and, in comparison, Korea raising its greenhouse gas reduction targets from 26.3 percent to 40 percent by 2030 compared to 2018 may seem relatively small. However, he said such countries reached the greenhouse gas emissions peak in the 1990s and have gradually reduced emissions since then, while Korea’s peak was just a few years ago in 2018.

“Thus, in comparison, we can say that our goal is a bolder, more daring challenge, since we are rapidly and steeply reducing [emissions] in a short period of time,” said Moon. But he added that the burden cannot be left just to corporations, and that the government must work together with companies, while drumming up support from the people in carbon neutrality efforts.

Lee took the opportunity to apologize to Moon for being harsh on him during the last presidential election in 2017, when they competed in the DP primaries, senior presidential secretary Lee Cheol-hee told reporters after the talks. The meeting was described as being “amicable.”

However, Moon and Lee made “no mention at all” of the Daejang-dong land development scandal during their talks, he added.

The main opposition PPP has been calling for a special counsel to investigate the corruption allegations surrounding the land development project, which coincides with Lee’s time serving as Seongnam mayor in 2015. 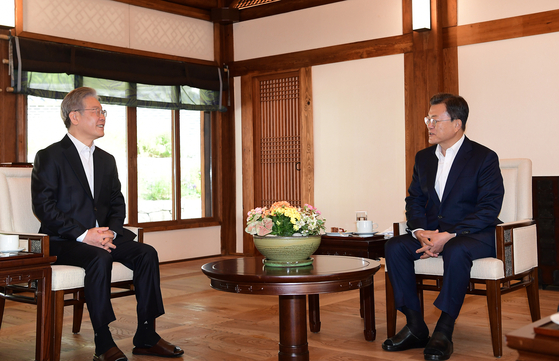 Lee Jae-myung, the presidential candidate for the ruling Democratic Party (DP), left, holds a meeting with President Moon Jae-in at the Blue House in central Seoul on Tuesday. [YONHAP]

The previous day, Lee announced his resignation as Gyeonggi governor to focus on his presidential campaign ahead of the March 9 election.

Lee Nak-yon initially contested the primary result, questioning the vote count procedure, but ultimately pledged to back the former Gyeonggi governor in his presidential election campaign last Sunday. The two Lees met Sunday at a teahouse in Seoul, and the former prime minister agreed to serve as an adviser to the candidate’s election campaign, signaling reconciliation.

The meeting with the president is seen to further boost Lee Jae-myung’s efforts to solidify his base and consolidate support within his party.

The meeting comes ahead of Moon's departure for a nine-day European trip Thursday.

Meetings were also held between past presidents and their succeeding ruling party presidential candidates. In 2002, then-President Kim Dae-jung met Noh Moo-hyun just two days after he was elected as his party’s candidate, while former President Lee Myung-bak met Park Geun-hye after 13 days in 2012.

Former Prosecutor General Yoon Seok-yeol, the frontrunner presidential contender for the PPP, called the talks between Moon and DP candidate Lee a “wrongful meeting,” calling it “a clear act of interfering in the election” in a Facebook post Tuesday. He stressed that the president should be keeping “neutrality.”