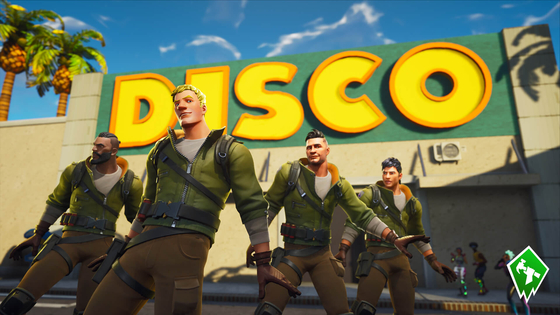 
The word metaverse was one of the trendiest words in Korea in 2021, with all kinds of conglomerates and entertainment industry insiders building their own universes, or spaces for users’ avatars to act out social, economic and cultural actions.

The iconic Hollywood film often associated with metaverse is Steven Spielberg’s 2018 action flick “Ready Player One,” which describes the not-so-distant future of 2045 in which the real world has gotten so dismal for people to live in that they escape to a virtual space called “Oasis.” In "Oasis," people can vicariously lead the lives they want through their avatars.

Local television series “Memories of the Alhambra” (2018-19) aired on the cable channel tvN also centers on the idea of a metaverse. The protagonists enter the world of an augmented reality (AR) game where they wear devices called “smart lenses.” In this AR world, the players fight for survival and level-up to attain weapons such as swords, bows and arrows and guns. The users can still see, smell, hear, touch and taste but their actions in the game do not affect reality.

These examples sound futuristically distant, but the concept of metaverse has been around for longer than people might think. According to the book “Metaverse” (2020), written by industrial engineering Professor Kim Sang-kyun at Kangwon National University, metaverse can currently be divided into four categories: augmented reality, life-logging, mirror world and the virtual world. The photos, videos and texts people upload on their social media accounts is a form of a life-logging metaverse, in which people extract a part of their lives that they want to share publicly.

On variety shows, such as entertainer Yoo Jae-suk's “Hangout with Yoo” on MBC, Yoo takes on multiple personas, such as a member of a mixed-gender pop group “SSAK3, a trot singer named Yoo San-seul, or the manager of girl group “Refund Sisters.”

Similarly, ordinary people also take on multiple personas in their lives — when they’re exercising, when they’re in the office, when they’re on vacation or when they’re in metaverse platforms such as on social media or playing online games. Facing the Covid-19 pandemic has only accelerated the transition to metaverse, increasing the speed of its application in all areas of culture.


When teaser clips and images dropped one by one before the debut of SM Entertainment’s latest girl group aespa last October, people were scratching their heads in confusion ahead of the launch of the agency's first girl group in six years since Red Velvet in 2014. The teasers showed each of the four members — Karina, Winter, Giselle and Ningning — with avatars, called ae. The idea is that the members are connected to their ae-counterparts, and the virtual members will collaborate with the real members in various ways. 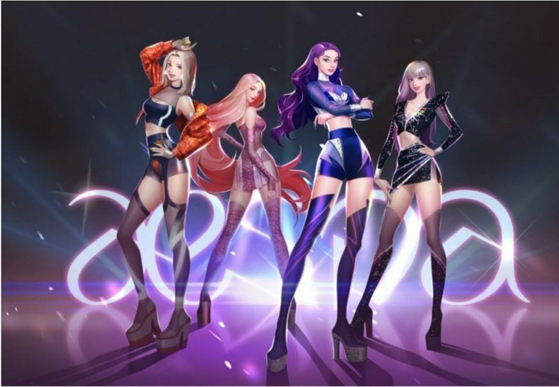 aespa celebrates its 1-year anniversary next month and the rookie group has already seen huge success with its single “Next Level” (2021). The song resonated on social media platforms such as TikTok thanks to its choreography which fans followed along. The song topped local music streaming charts for weeks.

However, experts evaluate that the success of aespa is not directly related to K-pop’s successful transition to metaverse.

“The avatars don’t account for even 50 percent of the group’s success,” music critic Jung Min-jae said. “The group did attract attention for their avatar characters, but it did not lead to the group’s popularity. The success of ‘Next Level’ lies entirely in the music. Its latest song ‘Savage,’ on the other hand, is less catchy and difficult for mainstream listeners to understand. Nevertheless, it succeeded, but the avatars or SMCU didn’t have much impact. aespa became popular the traditional way, and no matter what novelty of metaverse the future holds, if it is not based on music that can hook fans, it will be difficult to progress in the K-pop industry.”

SM is not the only agency to dive headfirst into metaverse. The choreography video of BTS’s hit English single “Dynamite” premiered not on YouTube, but through a virtual social space called “Party Royale” in FPS (first-person shooting) game Fortnite, developed by U.S. game publisher Epic Games last September. The K-pop superstars have long been making headways in the metaverse through the launch of fan community app Weverse, a HYBE affiliate. HYBE is the agency that manages BTS.

“Since none of the seven members have public social media accounts, we don’t have many ways to interact with them,” an ARMY fan in her 20s who wished to remain anonymous told the Korea JoongAng Daily. “They usually communicate with their fans through Weverse, V Live or Twitter, but for the former, they actually post pictures or text like on Instagram, and sometimes they even leave comments on other people’s posts. After a big event or concert, members often upload behind-the-stage moments and sometimes even personal posts which the fans really love.”

As of October, all of HYBE's artists have joined Weverse. Even singers from other music labels, such as YG Entertainment’s boy bands Treasure and iKON and girl group Blackpink have joined the platform. Solo artists CL, Sunmi and Henry, who are not signed with HYBE, also use Weverse.

Kakao Entertainment took a huge leap into the metaverse when it announced on Oct. 25 that it formed a partnership with Metaverse Entertainment, a subsidiary of Netmarble F&C to launch a K-pop idol group consisting of only virtual members next year.

The idea, which sounded outrageous a year ago, is now being accepted with a shrug of shoulders, as if to say, “why not?” Whether or not the group will be able to form a strong fandom is another question.

“The essence of ‘digging’ an idol group is through the human interaction,” said Lee Gyu-tag, a professor of pop music and media studies at George Mason University Korea. “Of course, avatars may perhaps be a relatively “safe” counterpart to dote on since they don’t carry the risk factors of causing problems, such as serving mandatory military duties, drunk driving or sexual assault, this also means that it will be that much more difficult for fans to be immersed with the members. Being a fan of a particular group or member means devoting your affection in spite of such risks, but without that insecurity, it almost becomes too easy for the fans and leads them to become less passionate too.”


The global popularity of Netflix series “Squid Game” did not stay just within the streaming service. In Roblox — an online platform where users can become creators of their own mini games, share them with others and cash in on them — there are 1,000  hits when “Squid Game” is typed in the search bar

Local production company Studio Dragon collaborated with Naver Z’s metaverse app Zepeto in July to launch avatar characters and a variety of fashion items worn by the characters in their hit tvN drama series “Hotel Del Luna” (2019). The app also reenacts a series of iconic scenes from the series with the avatars. The studio also sold 100 nonfungible tokens (NFTs) — blockchain-based proof of digital asset ownership that can’t be replaced with something else — of the Cassano Shield of Arm lighter from another hit tvN series “Vincenzo” (2021) in collaboration with major cryptocurrency exchange Korbit. 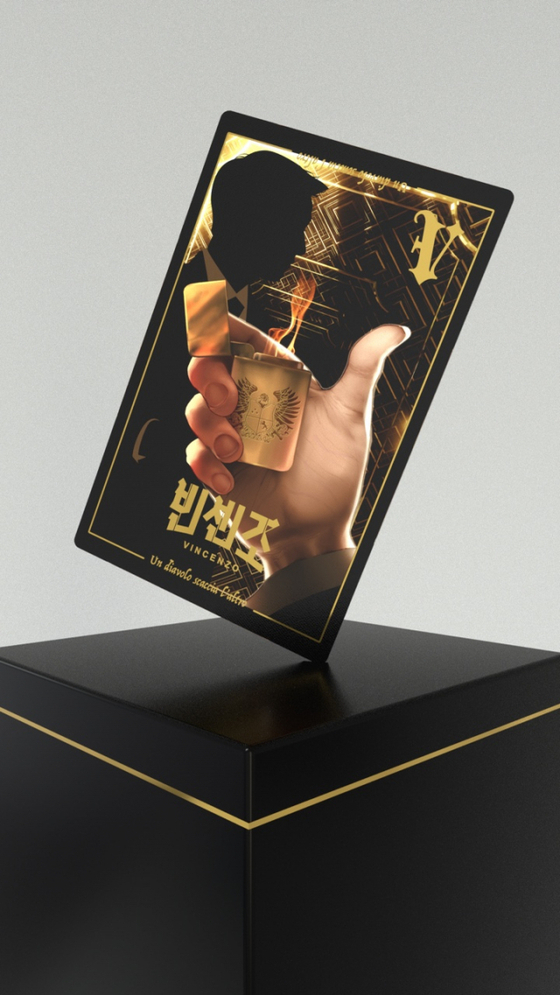 
“We believe that metaverse should be a virtual space where people can enjoy and experiment with things that they cannot do in reality,” said Chae Ji-tak, a licensing and business manager at Studio Dragon. “Which is why ‘Hotel Del Luna,’ a series which contains fantastical elements, was considered first as we now take baby steps into the metaverse and NFT market. Since both of the industries do not have spatial limitations, we consider them global businesses.”

Cable channel tvN also utilized intellectual property, or IP, from its popular television series and variety shows to launch its very own metaverse theme park dubbed “Enjoy Land” from Oct. 9 to 24, collaborating with metaverse platform Ditoland. Upon entering “Enjoy Land,” users could enjoy games that celebrities played on variety shows such as “Amazing Saturday” (2018-) and “Great Escape” (2018-). They could wander around Yulje hospital from hit series “Hospital Playlist” (2020-2021) or visit the same places as the characters in the new tvN series “Mount Jiri,” written by Kim Eun-hee and star producer Lee Eung-bok. 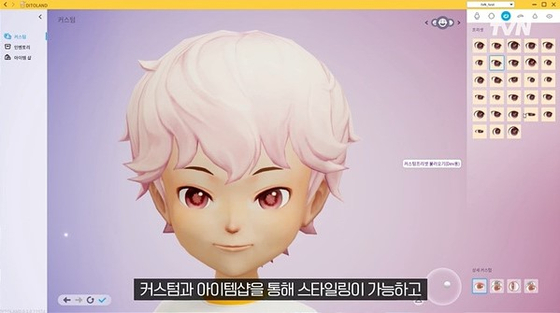 In celebration of its 15th anniversary of establishment, cable channel tvN launched a metaverse theme park called ″Enjoy Land″ where users could take part in a variety of games that celebrities played on the channel's shows. [TVN]


The channel is also set to release an interesting metaverse variety show “I Want to be a Star Although it’s Metaverse” (translation) on its streaming platform Tving on Friday at 4 p.m., in which six celebrities take on completely new identities — from their names, occupations and physical appearances — using face-editing technology. The show is a survival game that sees the six participants given a set of clues to uncover each other’s true identities.

“The creation of new experiences that users can take part in only in the metaverse will revolutionize how we experience entertainment and content,” said Ryu Jeong-hye, the Vice President of Strategic Marketing at Kakao Entertainment during an online forum titled “2021 Content Insight” hosted by the Korea Creative Content Agency on Tuesday. “I believe metaverse is set to become the ‘next big thing’ after the advent of the internet and smartphones. [...] I’m not just referring to its technology, but a shift in the paradigm itself.”

Ryu defined metaverse as “The Spatial Web” and accentuated its importance when integrated with local content.

“'The Spatial Web’ basically means that it will be possible for a user to summon all spaces to their current location,” Ryu explained. “Based on what the metaverse world has to offer, users will be able to indirectly experience things as if they are actually in reality.”

Mobile carrier SKT is releasing an immersive metaverse web drama series “Ifland” next month, where users can become the actual actors. The plotline of the romantic comedy revolves around a woman whose boyfriend’s face changes every day. Although the basic scenario is pre-set, users can portray the roles of subsidiary characters such as the protagonist’s friend or their acquaintances. According to SKT, all of the production staff and actors dubbing the avatars met on the metaverse to create this series.

The entire production process of SKT's upcoming immersive metaverse web drama series ″Ifland″ took place on the metaverse platform, from audition to the actual filming of the series. [SKT]


“When we saw how other users [in the metaverse] created and personalized their own avatars and enjoyed doing role play, we felt the real possibility of metaverse lay in people’s desires to participate and giving them room to expand their creativity,” an insider at SKT told the Korea JoongAng Daily. “Another interesting aspect is that the users can participate in the production of the series during whatever spare time they have. They can instantly ‘switch’ to their avatar’s life since they can access the metaverse anytime, from anywhere they want.”

Professor Kim Sang-kyun predicts that not only celebrities, but any ordinary person’s life can become a form of entertainment in the metaverse.

“We are already sharing each other’s lives in the form of vlogs on YouTube,” Kim said. “Through metaverse, some ordinary peoples' lives may be able to transition into livestreamed content like the Hollywood film ‘The Truman Show’ [1998]. Users who are curious about other people’s occupations may be able to vicariously experience them through such livestream broadcasts.”