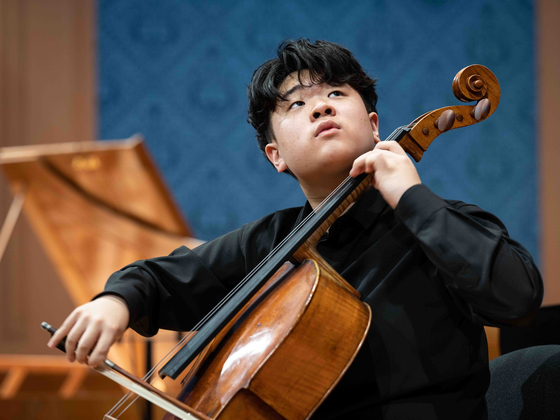 Han performs during the final round of this year's Geneva International Music Competition in Switzerland, which came to an end on Thursday. Han received the third prize. [CONCOURS DE GENEVE]

After the announcement of the winners, Han said, "I participated in two big contests this year alone and was able to grow musically. I am especially grateful to those who supported me and stayed with me until late in Korea."

The Geneva International Music Competition, which began in 1939, is open to performers under the age of 29. The competition is held every two years for two different sections among various instruments including piano, clarinet, violin, flute, viola and composition, among many others. This year's competition was open for cello and oboe.

Han performed Elgar’s “Cello Concerto in E minor, Op. 85” accompanied by l'Orchestre de la Suisse Romande under Georg Fritzsch for the final round. He competed against Bryan Cheng from Ottawa, who came second, and Japanese cellist Michiaki Ueno, who won the competition.

On top of the prize money of 8,000 Swiss francs ($8,780), the third prize includes international concert engagements for the next two years and a two-year management contract with Geneva Promusica, a management company for Geneva International Music Competition winners.

According to Kumho Cultural Foundation, Han is the second Korean artist to bring home the award in the cello category for the first time in 50 years. The first was famed cellist Chung Myung-wha, who won the award in 1971.

In May, the 15-year-old cellist also won the top prize for his instrument at the George Enescu International Competition in Romania, becoming the youngest winner in the competition’s history.

Han currently attends Korea National University of Arts, studying under Professor Lee Kang-ho. He also trained under Chung, who was a jury member for the competition's cello section.