Meet the artist taking his paintings to new heights

Meet the artist taking his paintings to new heights 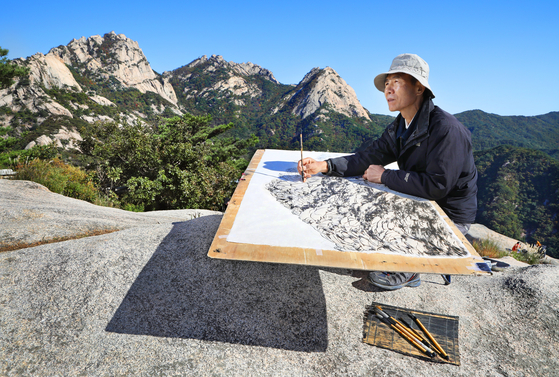 
Sixty-two-year-old Kim Suk-hwan, who has spent years recreating the beautiful landscapes of Mount Bukhan in ink-and-wash paintings, was originally an architect as well as a university professor.

After majoring in architecture, Kim started painting in 1991 after going on a trip where he learned about the life of Le Corbusier (1887-1965), a renowned Swiss-French architect and painter whose real name is Charles-Édouard Jeanneret. Kim was so impressed by Le Corbusier’s paintings that they inspired him to become an artist himself.

Kim has always been creative but never imagined that he would someday become a painter. While referencing Le Corbusier’s artworks, Kim learned to paint on his own. At first, he used watercolors and oil paints, but after exhibiting his sketches in 2008 at Youngpoong Bookstore’s Jongno branch in central Seoul, his work began to shift to monochromatic pieces.

Kim visits each and every mountain he intends on painting. Carrying a 1-meter-50-centimeter-wide (4.9 feet) and 80-centimeter-long drawing board on his shoulders, Kim climbs each mountain no matter how steep it is. Regardless of the weather, he hikes the landscape to make sure he can perfectly capture what he is looking at on his canvas. 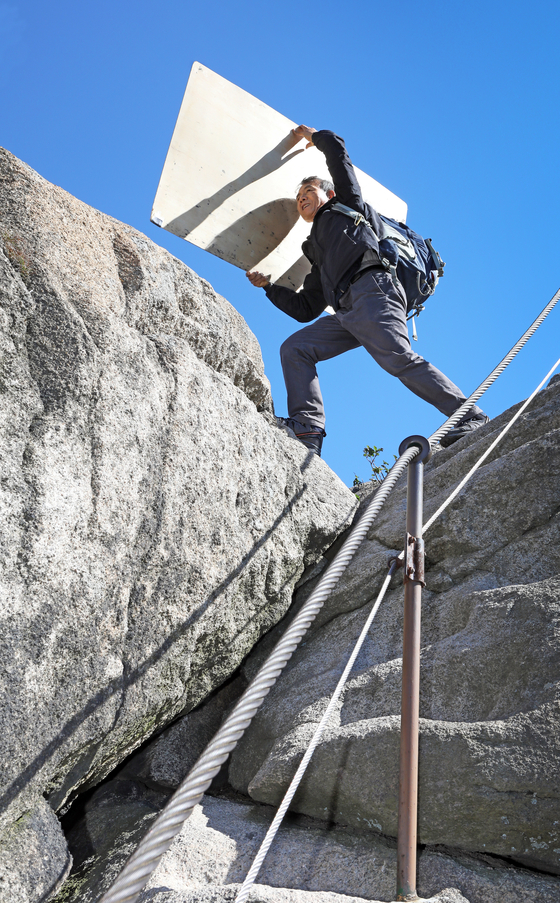 
Kim has an ambitious goal with his paintings — to put every inch of Mount Bukhan onto them. He has drawn every aspect of the mountains, including the panoramic view, the perspective view and the close-range view. He even paints the relatively smaller details of them too, like the valleys and peaks. Kim does whatever it takes to make sure not a single detail of the mountains is left out.

The reason why he portrays Mount Bukhan with such preciseness is because of its geographic history. In the early days of the Joseon Dynasty (1392-1910), King Taejo, the first king, along with prominent scholar Jeong Do-jeon and Buddhist monk Muhak, designated Hanyang, now Seoul, as the capital. Hanyang, at the time, was regarded as an excellent location by the theory of feng shui. Feng shui is an ancient practice where the location of a structure or site is decided in harmony with the inhabitant’s fortunes. Four mountains are centrally located in Hanyang in the four cardinal directions — Mount Bugak, Mount Namsan, Mount Naksan and Mount Inwang. Each perfectly represented one of the four mythological creatures that were the “guardians of the universe” in ancient China. Known as the Four Symbols as a whole, they consist of the Azure Dragon (east), the Vermillion Bird (south), the White Tiger (west) and the Black Tortoise (north).

The main mountain of the Mount Bugak range, in the north, is Mount Bukhan. It is known to provide vitality to the capital of the Korean Peninsula, which is why it has always been recognized as significant. Kim, who focused on cities while studying architecture at university, naturally developed an interest in Mount Bukhan, and this later influenced him to use the mountain in his paintings that would subsequently leave a mark in history. 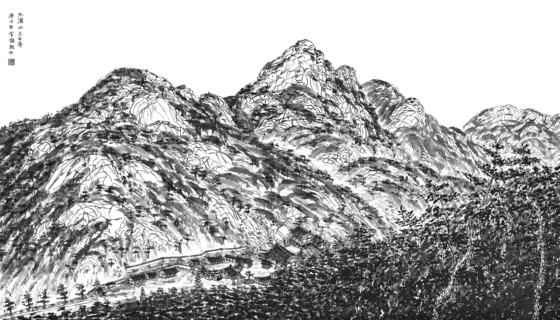 
However, this did not mean Kim only drew the scenery of Mount Bukhan. He also drew other mountains, for example Mount Gwanak, Mount Dobong and Mount Buram; expanding the spectrum of his works. He also paints the Han River, another place regarded as important in feng shui.

What makes Kim’s paintings special are that they are entirely based on imagery that he has seen with his own eyes on his expeditions. Kim aims to not only create art, but also create historical data.

The scenes depicted in Kim’s paintings are dynamic. His brushstrokes show lots of energy, compared with other ink-and-wash painters. Viewing Kim's paintings evoke a strong feeling that the pieces are actually alive, like they have a heartbeat. The distinctiveness of Kim’s paintings lies in his vivid brushstrokes; conveying the emotions you feel after visiting the stunning landscapes he is depicting.

Experts say that the brushstrokes in Kim’s paintings are like a gift from God, especially how they capture and express objects in an outstanding way. He goes with the flow, however he feels at the moment, allowing his loose, seamless brushstrokes to leave lasting, intense impressions. 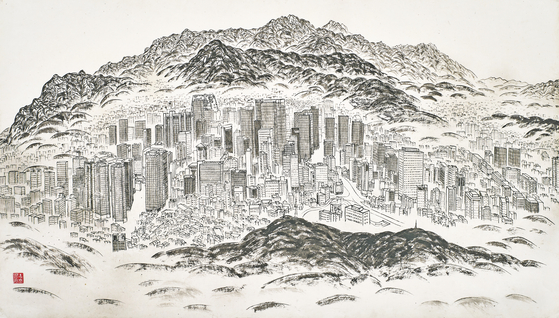 
Fewer colors make his paintings of mountains more touching, according to Kim. Color is not necessary to illustrate the depth of the mountains, the rocks or the forests.

Le Corbusier wrote “We will do anything. Elaborately and meticulously,” which Kim said he has engraved on his heart. Kim believes that in life, perseverance and diligence is the key to achieving one’s goals and feeling a sense of accomplishment. This explains why he has devoted so many years to painting mountains. 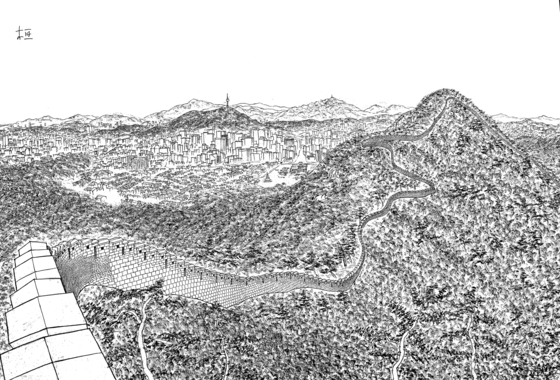 Hanyangdoseong, or Seoul City Wall, and the view of Seoul seen from Mount Baegak [KIM SUK-HWAN]


Kim said he also has the phrase “Time does not remember pain” written on his desk, which he thinks of as his own golden rule. Although there were many trying times during his journeys, as time passed by these painful memories were forgotten and only the results of his paintings remained.