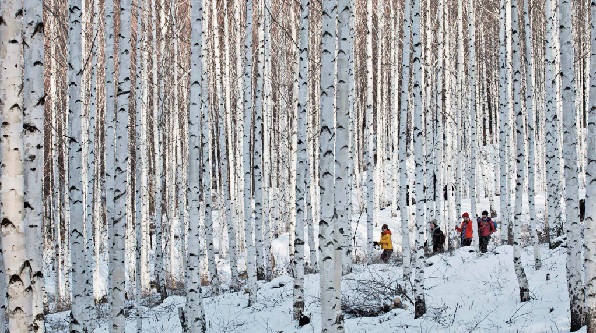 What looks like white marble pillars springs up from the white ground covered in snow. The scene gives visitors the sense of witnessing some natural miracle. This forest filled with white birch trees is in Inje County, Gangwon.

The forest is named “Whispering Birch Tree Forest,” as the sound of leaves rustling in the wind almost sounds like someone whispering in your ears. The forest has three different routes: the tree course (0.9 kilometers, or 0.6 miles), the healing course (1.5 kilometers) and the adventure course (1.1 kilometers). All these courses are popular among those seeking some quiet time to relax.

The entire area of the forest, which is located on the side of Wondae Peak (684 meters) in Wondae-li, is 138 hectares. However, only 25 hectares are open to the public. In the early 1990s, the Inje Forest Management Office, operated by the Korea Forest Service, decided to cut down all the pine trees that were dying from pine wilt disease. Then, it started planting around 414,000 birch trees over several years on the same spot.

It is not so hard to find the birch forest. Visitors need to write down their names at the base camp called Wondae-li Forest Monitor Center and then walk along the trails. It takes about an hour by foot. The trail is wide and well-paved so anyone can enjoy the walk. During the wintertime when it snows a lot, it is recommended that hikers wear hiking boots along with climbing crampons for safety. 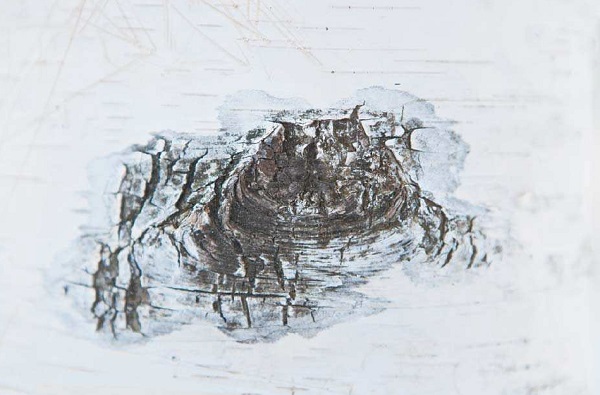 As you enter the forest, you will start to spot a couple of birch trees dressed in all-white bark. By the time you feel you are getting sweaty, you will finally get to see the wide view of the Whispering Birch Forest. It will feel as if elves will come out from the behind the trees in the forest. Visitors around all look happy as if they are the main characters in a happy-ending fairy tale.

Birch trees usually grow well in colder areas, especially those regions above 25 degrees in latitude. The tree has earned its Korean name of jajak tree because the tree makes a sound similar to “jajak” when it catches on fire due to the oil in the wood.

The trees are widespread in countries with colder weather, such as Russia and Finland, and have often been in the background of literary works. Scenes from the film “Doctor Zhivago” (1965) were set in a birch forest, and Russian writer Leo Tolstoy was buried in a birch tree forest. Many Korean writers, including poet Ko Un and writer Ahn Do-hyun, have also praised this type of tree in their works.

The tree is also more popular than other types of trees for its versatility. The bark of birch trees is not only smooth and strong, but also does not get rotten even after a long time. For that reason, birch tree bark was often used as a medium on which to write instead of paper. Even Cheonmado, the painting of a white horse that was discovered in Cheonmachong, the Royal Tomb of the Silla Dynasty (57 B.C. to A.D. 935) is known to have been painted on birch bark. 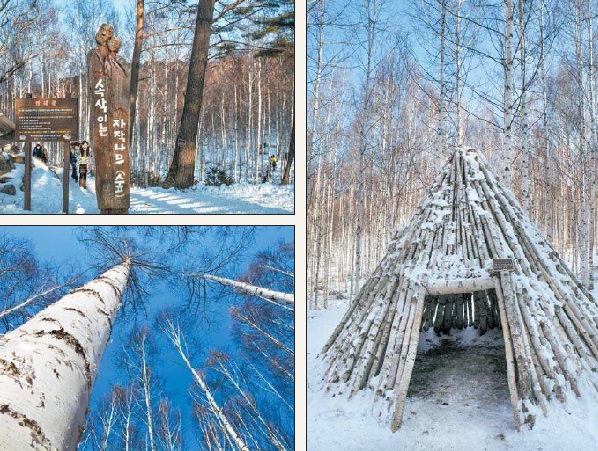 Clockwise: The forest contains a cone-shaped wooden shelter made of birch trees; Birch trees grow straight up toward a clear blue sky; A wooden sign marks the entrance to the birch tree forest. [PARK SANG-MOON]

Some parts of the Tripitaka Koreana Woodblocks at Haein Temple in Hapcheon County, South Gyeongsang, are also known to be made of birch tree bark, showing how strong the bark is.

Many believe the tree is also beneficial for health reasons. Xylitol, which is known for its ability to keep cavities away, is extracted from the trees. The trees also have plenty of phytoncide, which brings many people suffering from irritated skin problems due to atopic disease to the forest.

The forest, which is perfect for a relaxing trip, is also a spot where some celebrities go to film their music videos. Singer-actor Lee Seung-gi filmed the music video for his 2012 song “Return” there. The video was about a man looking for his first love from when he was young, and the sentiment was well-matched with the overall atmosphere of the forest. From that point on, the forest, which was previously only popular among professional photographers, started to get more recognition among the general public. Now the forest has become a popular travel destination that attracts about 200,000 visitors a year.

The birch tree flower has the meaning of waiting for someone. Some come to see the flowers in the spring, but the best time to visit the forest is in the winter, when the entire world is covered in white.