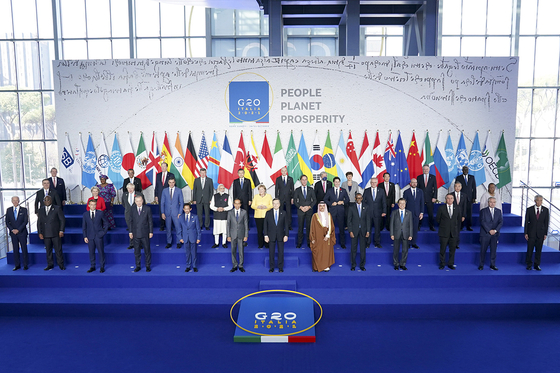 President Moon Jae-in, bottom fourth from right, poses for a commemorative photo with the Group of 20 leaders at the G20 summit at the La Nuvola convention center in Rome Sunday. [BLUE HOUSE]

President Moon Jae-in pledged that Korea will completely phase out coal-based power generation by 2050 at the G20 summit in Rome Sunday.

“Korea is boldly pushing policies to reduce its dependence on coal,” said Moon, speaking to the Group of 20 leaders at the two-day gathering. “We will put a complete end to coal-fired power generation by 2050.

During a second session of the G20 summit on climate and the environment, Moon said that Korea has also already suspended public financing for new overseas coal plants. He noted that Korea had shuttered eight coal-fueled power plants earlier than originally scheduled during his administration and plans to shut two more by the end of this year.

“Korea will stay in lockstep with the push for carbon neutrality,” said Moon, noting that a public-private Presidential Committee on Carbon Neutrality recently set out Korea’s pathways to 2050 carbon neutrality.

Earlier this month, Korea announced a new 2030 nationally determined contributions (NDC) target to reduce greenhouse gas emissions by 40 percent from the country’s peak in 2018, which Moon will present at the United Nations 26th Climate Change Conference, or COP26, this week.

In the G20 meeting, Moon stressed the creation of new industries through his Korean Green New Deal policies and support for the private sector's technological development and investments to accelerate carbon neutrality. Korea is emphasizing the hydrogen economy and will strengthen global cooperation in this sector, he added.

Moon stressed that the “first 10 years are crucial,” adding the implantation of the 2030 NDC goal “will determine the success or failure of 2050 carbon neutrality.”

In the third session on sustainable development, Moon referred to Korean boy band BTS, who last month attended the UN General Assembly as a special presidential envoy for future generations and culture.

“The future generation is the protagonist of sustainable development,” he said, pointing out that young people are already familiar with digital technology and highly sensitive to the issue of climate change. “I am confident that young people will be able to do things that the older generation could not do.”

In the first session on the global economy and health, Korea pledged to donate $200 million to the Covax facility for equitable vaccine distribution and also provide support directly to vaccine-deficient countries.

The G20 leaders issued a Rome declaration Sunday at the end of a two-day summit urging all countries to take "meaningful and effective actions" to limit the global average temperature rise to 1.5 degrees Celsius above pre-industrial levels. This is in line with the 2015 Paris climate agreement, which calls for keeping global warming to well below 2 degrees Celsius above pre-industrial levels, and preferably to 1.5 degrees.

They agreed to cooperate in a transition towards low-emission power systems which will “also enable those countries that commit to phasing out investment in new unabated coal power generation capacity to do so as soon as possible.”

The leaders said they will accelerate their actions “across mitigation, adaptation and finance, acknowledging the key relevance of achieving global net zero greenhouse gas emissions or carbon neutrality by or around mid-century and the need to strengthen global efforts required to reach the goals of the Paris Agreement.”

The joint communiqué also urged the vaccination of at least 40 percent of the population of all countries by the end of 2021 and 70 percent by mid-2022, as recommended by the World Health Organization (WHO). The G20 countries agreed to take steps to help boost the supply of vaccines and essential medical products in developing countries.

The G20 countries account for more than 80 percent of world’s GDP and 75 percent of its global trade.

Moon spoke on the sidelines of the summit with leaders of Germany, Australia, France, the United States and the European Union over Saturday and Sunday. 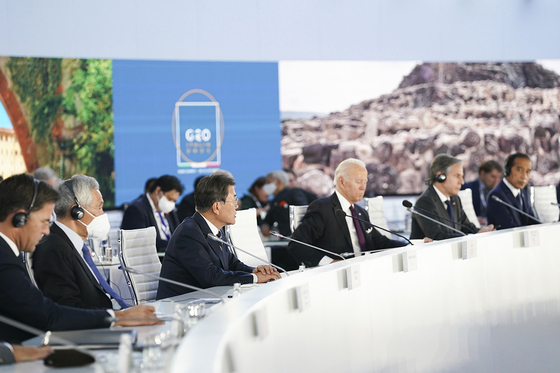 President Moon Jae-in, third from left, speaks at an event hosted by U.S. President Joe Biden on global supply chain resilience Sunday in Rome, on the sidelines of the G20 summit. [BLUE HOUSE]

On Friday, Moon met with Pope Francis at the Vatican and said Koreans have “high expectations” for a possible papal visit to North Korea.

On Saturday, Moon attended an exhibition on “Barbed Wire, Heralds of Peace” at the Church of Saint Ignatius in Rome, displaying 136 crosses fashioned out of barbed wire from the demilitarized zone (DMZ) separating the two Koreas.

“Please imagine this: If the barbed wire along the military demarcation line and DMZ is removed, and the war between the two Koreas is permanently ended, international organizations in both Koreas could relocate their offices there,” said Moon at the exhibition. “UN peace organizations could set up headquarters there and the two Koreas establish liaison offices. By doing so, the now barbed wire-filled DMZ could be transformed into a truly international peace zone.”

In a Facebook post before his departure from Rome, Moon wrote, “Pope Francis, whom I met again after three years, has consistently prayed for peace on the Korean Peninsula and expressed his intention to visit North Korea.”

Likewise, he said that “G20 cooperation will serve as a springboard for an inclusive recovery.”

Moon arrived in Britain late Sunday, the second leg of his nine-day Europe tour, to take part in the COP26 conference in Glasgow, Scotland, over Monday and Tuesday.